Salem Al Dawsari scored with the last kick of the game as Saudi Arabia ended their 2018 FIFA World Cup campaign with a consolation 2-1 win over Mohamed Salah's Egypt in Group A.

Al Dawsari's goal means that Saudi Arabia finish third in the pool on three points, while Egypt return home without a point to show for their efforts.

Essam El Hadary had earlier looked like claiming the spotlight after becoming the oldest player to ever play in the World Cup at the age of 45 years and 161 days and saving a first-half penalty from Fahad Al Muwallad. 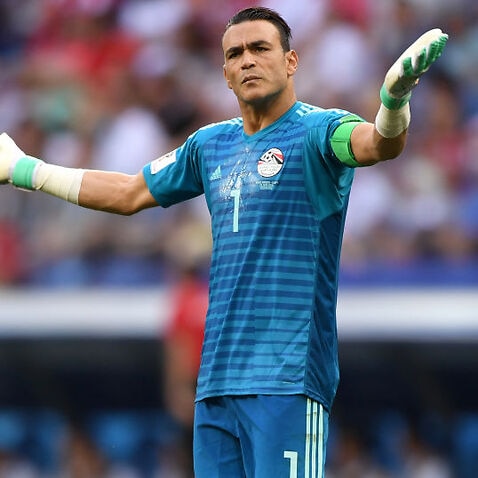 No sooner had the veteran goalkeeper finished celebrating and he was facing another spot-kick, this time given after the lightest of shirt tugs by Ali Gabr on Al Muwallad.

Referee Wilmar Roldan was encouraged to review the decision by VAR, but the Colombian stood by his initial call giving Salam Al Faraj the chance - after a three-minute delay - to drill past El Hadary and pull his side level deep into first-half stoppage time.

Mohamed Salah - whose international future has been the subject of intense speculation this week - had earlier opened the scoring for Egypt with a fine finish, but Hector Cuper's men finished empty handed thanks to Al Dawsari's last-gasp effort.

After a largely anonymous opening 22 minutes, Salah produced a moment of quality that has been his hallmark for the past 12 months.

The winger took Abdallah El Said's long ball in his stride and then seamlessly sent a deft lob over the onrushing Yasser Al-Mosailem with his second touch.

Saudi Arabia had offered nothing in the way of attacking threat, but were given a chance of an unlikely leveller five minutes before the interval when Fathy was adjudged to have deliberately handled Yasir Al Shahrani's cross inside the area.

El Hadary produced a stunning save to deny Al Muwallad, but his celebrations were cut short when a second penalty was awarded for Gabr's tug on Al Muwallad's shirt.

Al Faraj stepped up this time to fire past the veteran goalkeeper and draw his side level.

After such a dramatic ending to the first half, it was hardly surprising that the second period started in more muted fashion.

Trezeguet planted a header narrowly wide just before the hour, while El Hadary did well to keep out efforts from Hussain Al-Mogahwi and Mohannad Aseri in quick succession.

Saudi Arabia substitute Kahraba fired straight at Al-Mosailem late on as the game appeared to be petering out to an uninspiring draw, but Al Dawsari ensured his side's campaign finished on a high with a cool right-footed volley past El Hadary in the closing stages.