Ronald Koeman felt Lionel Messi's angry response to Luis Suarez's Barcelona exit made "sense", but insists the Uruguay striker left of his own accord.

The turbulence at Barca became arguably the biggest saga of the pre-season anywhere in European football, with Messi attempting to force an exit after Suarez had been put up for sale, and Koeman replacing Quique Setien in the wake of their 8-2 UEFA Champions League defeat by Bayern Munich.

While Messi ultimately accepted that leaving was an impossibility despite being convinced a get-out clause in his contract was still valid, Suarez was sold to Atletico Madrid for just €6million.

Suarez's exit coincided with his close friend Messi posting an emotional farewell message on his official Instagram account in which he publicly slammed Barca's treatment of the former Liverpool striker. 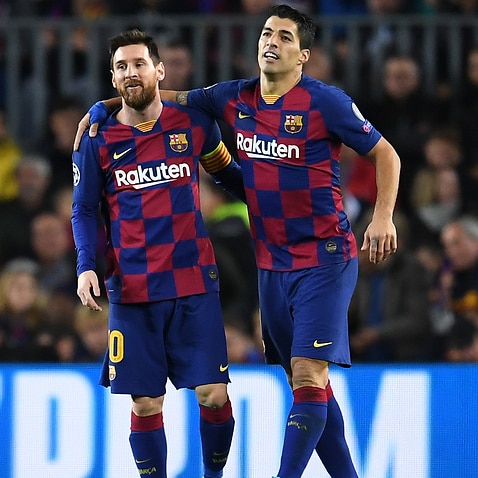 And although Koeman said the outburst was understandable, he was keen to stress that no one forced Suarez out.

"If you have someone in the locker room whom you and your wife and children also hang out with outside football, then such a reaction makes sense," Koeman told NOS.

"I said that to Messi too: I understand that you are disappointed and think it is a terrible shame that he is leaving, but these are choices of the club.

"In the case of Suarez, it had become very difficult for him to play, and I made that known to him honestly.

"He found that difficult, but I never had any trouble with him at all. He just trained, trained well.

"In the end he made the choice to leave. And I did also say that, if you don't leave, for whatever reason, then you're just one of the group, then you prove me wrong.

"He could have stayed, yes."

Explaining the club's decision to plan for life without Suarez, Koeman put it down to a desire to start a new era and give young players more of an opportunity.

"I'm good with Luis, but the club felt that we had to rejuvenate," he added. "You can see that now in the team.

"Ansu Fati plays, he is 17 years old. We have Pedri, 17 years old, who gets his chances. Ronald Araujo is 21. [Francisco] Trincao comes in a lot and is 20 years old, and we have taken Sergino Dest, who is 19. Those are all players for the future."

As for Messi, Koeman is adamant the six-time Ballon d'Or winner's behaviour has been befitting that of his role as captain since opting to remain at the club.

"After signing here as the coach, I immediately contacted Leo," Koeman continued. "I went to his home and talked to him about his future.

"He was clear about his dissatisfaction. In the end it worked out well and from the moment he indicated [that he is staying], he has done everything I expect from him."