Barcelona have appointed Ronald Koeman as their next coach as the Catalan giants look to rebuild after their 8-2 thrashing by Bayern Munich in the Champions League.

Koeman, who has left his role as manager of the Netherlands, signed a two-year-deal with Barcelona, who sacked Quique Setien on Monday after he presided over the club's worst-ever defeat in European competition.

Koeman, who will be officially presented at the Camp Nou stadium later on Wednesday, is dearly loved at Barca for his role in Johan Cruyff's hugely successful side known as the 'Dream Team' and for scoring the goal that delivered the club's first European Cup in 1992.

"Barcelona and Ronald Koeman have come to an agreement for him to be the team's coach until 30 June 2022," said Barca's statement.

"A club legend and Barca's hero at Wembley who gave fans their first European Cup, Koeman is coming back to the Camp Nou. But this time he will be in the dugout to lead the team."

Club president Josep Maria Bartomeu has declared that Lionel Messi will be the lynchpin of the Barcelona side coached by Koeman next season.

Bartomeu ruled out the possibility of the Argentinian star - out of contract next summer - leaving the Nou Camp.

"I have spoken with Koeman and the pillar of our project is Messi," Bartomeu said.

"He has a contract until 2021, I speak a lot with Leo and more regularly with his father.

"He is number one in the world. There is no doubt that in Koeman's new project you can count on Messi."

Messi has been synonymous with Barca for more than a decade, scoring 631 goals in 734 appearances since breaking into the first team in 2005, helping the club win four Champions League crowns and 10 La Liga titles.

But his future had come into question after the stunning Champions League defeat to Bayern Munich which appeared to leave nobody safe at the club. 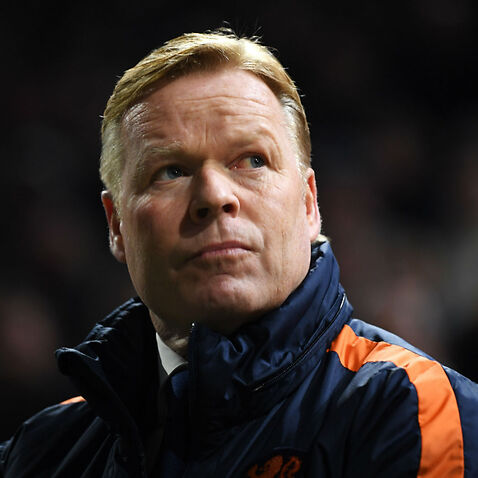 Koeman speaks out on 'awkward timing' of imminent Barcelona move

Setien, only in charge since January, was sacked on Monday, and a day later sporting director Eric Abidal left the club too, though Bartomeu indicated the former defender had jumped rather than been pushed.

Bartomeu has himself come under intense scrutiny, but rather than resign or face an immediate election he has chosen to bring forward the club's next ballot to March.

By then, he will hope Koeman has done much to ease the extreme pressure on the club's board.