The Matildas superstar fired Perth Glory into the grand final on Sunday with a sensational hat-trick in a 4-2 extra-time win over premiers Melbourne Victory.

Kerr will now face Sydney FC for the championship after the Sky Blues won through to their second-consecutive grand final with a 2-1 semi-final win on the road against Brisbane Roar on Sunday evening.

The 25-year-old's treble against Victory means she now has 16 for the W-League season including two against her former club in a 2-1 win over Sydney FC in December.

"We'll get a plan in there, if it's trying to stop her with two people or trying to stop the service to her maybe, I don't know," Juric said when asked how to deal with Kerr.

"You know what? She's hard to stop, probably impossible, so we'll just try to score more goals than she does." 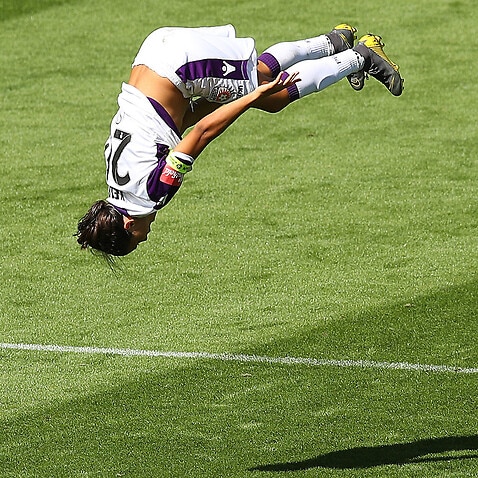 The Sky Blues will be seeking to make amends after last year's 2-0 grand final defeat to Melbourne City and have a red-hot Matildas striker of their own to pose a goal threat.

Caitlin Foord's strike against Brisbane in the semi-final was her 10th of the season - and sixth against the Roar alone in 2018-2019.

After missing out on last year's grand final due to a foot injury, the 24-year-old is clearly as determined as anyone at Sydney FC to set the record straight.

"Sitting out last year was never fun so I was never going to let us lose," Foord said.

"If we are at our best, we can beat anyone."

Another forward set to play a role in the grand final is experienced Lisa De Vanna.

The 34-year-old missed the trip to Brisbane with a bruised knee but Juric is expecting the Matildas veteran to be back on the pitch against the Glory.

"The last session before we came here she went off the session so we didn't take her and I actually told her 'we're getting a grand final so make sure you're ready to play in that one'," Juric said.

The FFA will announce the date and venue of this weekend's grand final later on Monday.