High-flying Sam Kerr has been hailed for her best game yet in Chelsea colours, scoring one huge goal and making another in a thrilling 2-1 win over German powerhouses Wolfsburg in the UEFA Women's Champions League quarter-final first leg.

Kerr's Australia teammate Ellie Carpenter then helped champions Lyon to a huge 1-0 win in the first leg at their big rivals Paris St Germain on Thursday as the two Matildas, both on opposite sides of the draw, moved another step closer to a potential showdown in the final.

Chelsea boss Emma Hayes reckoned Kerr had never looked better for the Blues since her move to the club in November 2019.

"It was her best game in a Chelsea shirt. She looked relaxed and calm, held the ball up, and had a swagger about her game," said the manager.

With Chelsea struggling to make an impact against their bogey side, Australia's captain changed the course of the tie in the 55th minute with an accomplished finish to break the deadlock. 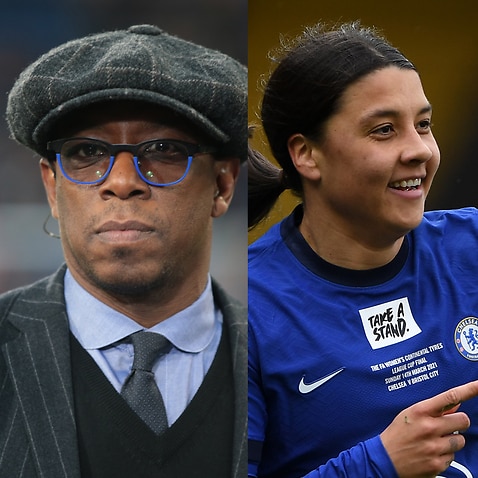 Linking up superbly yet again with her English strike partner Fran Kirby, who spun around to sent through a neat through ball, Kerr pushed the ball wide of Wolfsburg keeper Katarzyna Kiedrzynek and fired high into the roof of the net from an awkward narrow angle.

With Chelsea's first shot on target, the 27-year-old had netted her 17th goal of an increasingly impressive season - and she wasn't finished.

Eleven minutes later, Kirby took advantage of careless defending, found Kerr in the box and her simple lay-off set up Chelsea's second for Pernille Harder, the Danish superstar the Blues had signed from Wolfsburg last September.

Kerr's movement in a largely solitary role up front was, as no less a judge than Arsenal legend Ian Wright noted about her recently, on a "different level".

She just missed getting on to the end of another Kirby cross and one superb turn near the touchline and defence-splitting pass inside should have led to a goal for fullback Jonna Andersson, who got lost so high up the field.

Chelsea, seeking trophies on four fronts, were pegged back by Dominique Janssen's 70th minute penalty in a high-quality encounter and looked fortunate to have come away with a goal advantage to take into next Wednesday's second leg.

Wolfsburg, who knocked Chelsea out of the competition in three successive seasons from 2015-16, had twice hit the woodwork and looked the better side until Kerr helped kick Chelsea into gear after the break, with Hayes accepting the tie is far from over.

In Paris, Carpenter's all-conquering Lyon, seeking their sixth consecutive WCL title, found life hard at the Parc des Princes against a PSG side who have been threatening their French and European hegemony.

But Carpenter helped the holders resist PSG's first-half pressure before Lyon found a higher gear after the break and sneaked a win with an 86th minute penalty from inspirational captain Wendie Renard.