Sam Kerr and Ellie Carpenter, two of Australia's top women internationals, will get a taste of the Champions League quarter-final action for the first time after helping their powerhouse sides progress to the last-eight.

Matildas captain Kerr, who had been Chelsea's game-changer in last week's home leg of the last-16 tie against Atletico Madrid, had a quieter afternoon in Wednesday's dramatic 1-1 draw in the second leg in Monza, Italy.

Meanwhile, in Denmark, Carpenter, player of the match in the first leg, was rested for champions Olympique Lyonnais's record-breaking 3-1 second-leg victory over Brondby as they sealed an aggregate 5-1 triumph.

The two Aussie teammates, playing for two of the tournament's powerhouses, could next find themselves facing each other when Friday's draw for the last-eight is made. 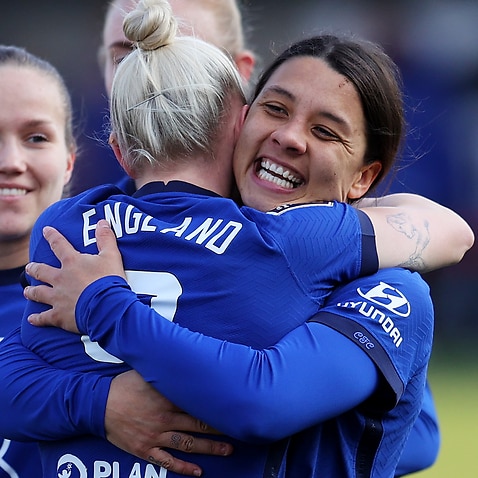 Kerr had earned one of Chelsea's goals when she was brought down for a penalty and assisted on the other during the English champions' 2-0 win in an incident-filled first leg.

Atletico missed two spot-kicks, well-saved by Ann-Katrin Berger, and Chelsea converted one in that game - and the bizarre pattern continued as the Spanish side blew their chance of getting back into the tie when English striker Toni Duggan smashed her 75th-minute penalty against the bar.

Within two-and-a-half minutes, Chelsea had been awarded their own penalty which Maren Mjelde converted, effectively settling the tie even though Emelyne Laurent earned a consolation equaliser in added time.

Atletico was unlucky, with Chelsea's penalty having been gifted for a dubious handball awarded against Sonia Garcia and having had another clear shout for a spot-kick of their own earlier ruled out.

At Brondby, Lyon kept fullback Carpenter, who has been one of their stars this season, on the subs' bench, perhaps with a view to the weekend's probable French league decider against Paris St Germain. It didn't stop the champions, who are seeking a sixth straight crown, from setting a new landmark with their 30th successive Champions League match without defeat, a run that stretches back nearly four years.

Surprisingly, they found themselves one down early through Nanna Christiansen's 11th-minute goal but that was the only chance the home side created.