Group G leader Austria only needs a draw in Sweden on Wednesday morning (AEST) to qualify for EURO 2016 after Zlatko Junuzovic scored the only goal of the game to give it victory over Moldova. 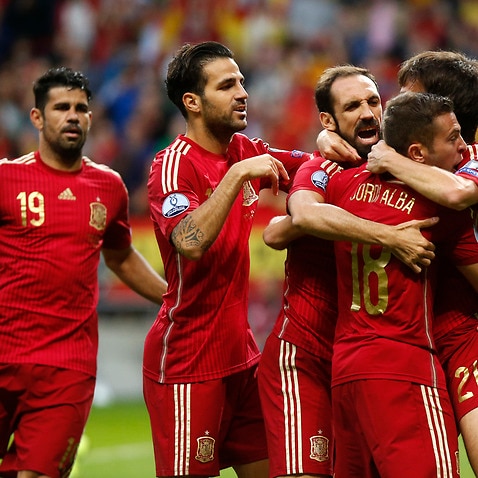 Russia is just a point behind second-placed Sweden after Artem Dzyuba secured a 1-0 victory over Erik Hamren's side in Leonid Slutsky's first game in charge, while Montenegro is still in the hunt to qualify after it saw off Liechtenstein 2-0.

England became the first team to qualify by hammering San Marino 6-0, and it was a day to remember for Wayne Rooney as he equalled SIr Bobby Charlton's national goalscoring record.

Rooney has not made the best of starts for Manchester United this season, but the striker found the net with a contentious penalty in Serravalle to move level with the legendary Charlton's tally of 49 goals for England.

A Cristian Brolli own goal doubled England's lead before half-time, then Ross Barkley scored his first senior international goal and substitute Theo Walcott helped himself to a double either side of Harry Kane's strike.

Rooney, who was replaced by Kane just before the hour-mark, could surpass Charlton in the list of all-time England goalscorers when Switzerland visits Wembley in midweek and he can also now look forward to leading his country out in France next year.

Roy Hodgson's side has a 100 per cent record in qualifying with three matches remaining and is on course to finish top of Group E, while Switzerland is well placed to join it after its dramatic 3-2 win over Slovenia.

Josip Drmic was Switzerland's hero, scoring twice to secure a stunning victory after Slovenia had been two goals up with 10 minutes remaining courtesy of goals from Milivoje Novakovic and Bostjan Cesar.

Drmic pulled a goal back after 80 minutes, then struck again four minutes into time added on after Valentin Stocker had levelled after 84 minutes in Basel to ensure Switzerland can seal at least a play-off spot by beating England.

Estonia beat Lithuania 1-0 to remain only two points behind Switzerland with three games to play.

A Jordi Alba header and a controversial Andres Iniesta penalty in the first half ensured Spain beat Slovakia 2-0 to leapfrog it into top spot in Group C.

Slovakia had beaten Spain 2-1 last October, but there was to be no repeat in Oviedo as the visitor's perfect record was ended, although it can still guarantee a spot in a European championship for the first time as an independent nation by beating Ukraine at home on Wednesday morning (AEST).

Ukraine is three points adrift of Slovakia after its 3-1 win over Belarus, while Luxembourg was a 1-0 winner over FYR Macedonia in the other Group C clash.