Sixty years after he was the first Indigenous Australian to be selected for a national football team, John Moriarty continues to be a trailblazer - his football program is continuing to create pathways for the next generation of Indigenous talent.

In 1960, John Moriarty was the first recognised Indigenous Australian to be selected for a national football team.

However, he never took the field for the Socceroos after the tour of Hong Kong was cancelled due to Australia's expulsion from FIFA.

Moriarty’s dream of playing for the Socceroos was never fully realised due in part to the incompetence of those in charge of football in Australia at the time, and a high-speed collision that left him with scars on his knee for life.

60 years on and Moriarty and his organisation are working every day to create more pathways for young Indigenous children that will help them with their day to day lives and will help the Australian football community discover our next group of Indigenous talent.

The 2020 edition of IFW will be celebrated in JMF communities in the Northern Territory, New South Wales and Queensland - with live streaming of the gala day to be hosted via TWG website from 10am (AEDT) on Saturday, November 14.

Over 1200 Indigenous children will be involved in workshops, sessions with sports psychologists and nutritionists, as well as football clinics and community gala days.

“The week is all about the power of football to create change for good,” Moriarty said, earlier this week.

Moriarty and his foundation are the embodiments of using the power of football to create change for good.

In 2018, JMF was recognised globally as one of three finalists for the 2018 FIFA Diversity Award - the first Australian organisation to achieve the honour.

JMF has been helping Indigenous kids around the country since 2012. 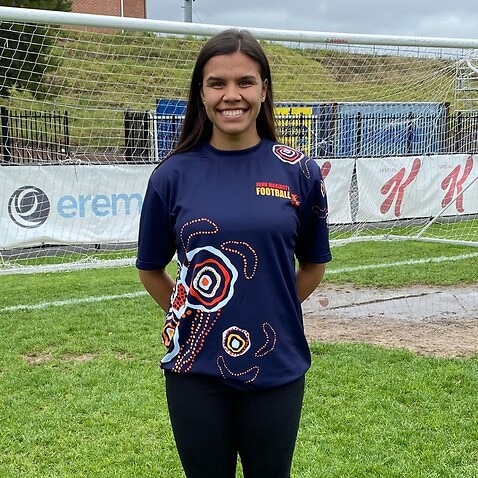 Jada Whyman lived in a tent to make it as a footballer. But it shouldn't be so hard

Two of the most high profile scholars to come out of the JMF program are Young Matildas Jada Whyman and Shadeene Evans.

“Football is not the cheapest sport, financially JMF helped me a lot once I moved from Wagga to Canberra and then Canberra to Sydney,” Whyman said at an IFW launch on Tuesday.

“They helped out in little ways that people forget about, that actually make a big difference in people’s lives and it was just amazing to have that kind of support. My family appreciated it so much and I’ve always been very appreciative of it.

“Moving from the country to the city, it’s a big move for a young person. JMF gave me a community to rely on and lean on when you just felt a little bit out of place in the big city.

“They also gave me the opportunity to give back and I get to go down to Dubbo or here in Sydney and do clinics.

“I get to meet all these young beautiful people who are just doing amazing in their own lives and they don’t even realise how much they’re doing at such a young age.”

When Evans arrived at Westfield Sports High as part of the JMF program, they asked Whyman to become a mentor to her, even though she was only just a few years older.

A mentorship quickly turned into a strong friendship.

“It meant a lot to me to have another Koori girl up here doing her thing, I don’t think she realises how much support she’s given me over time as well,” she said.

Evans and Whyman are both ambassadors for Indigenous Football Week and Australian football is all the richer for their continuing contribution to the game.

They are examples of what can be achieved when a pathway is made available, and JMF continues to make them available.

“It’s just having those pathways that allow young Indigenous people to come up to Sydney and do things they never thought they’d be able to do in their hometowns,” Whyman said.

However, it’s not just Indigenous children coming to Sydney but vice-versa, with Indigenous kids in Sydney returning to the country.

This weekend, Eastern Suburbs Football Association (ESFA) will send a team to Dubbo to compete in a John Moriarity Football gala day.

Some of the kids ESFA are sending will be seeing their local relatives who live close to Dubbo.

Meanwhile, ESFA President Nigel Singh will take up a car load of gear donated from teams in his association for local Indigenous kids.

“It shows you can be there on the day and participate or you can do some other things and support the initiative,” Singh said.

ESFA was one of the local associations that got involved with JMF after speaking to Craig Foster, former Socceroos midfielder and current ESFA player, about what they could do to help.

“The collaboration with JFA and IFW was really important. One of the thematics we saw through COVID, was that as a football organisation we have a social responsibility and a wider remit beyond just playing football. We’re trying to drive the inclusive nature of the game,” he said.

Indigenous Football Week sees a game often fractured united, with SBS, the FFA, PFA and Fox Sports all throwing their support behind the cause.

“Sport can be an incredible vehicle and for me, it gave me the confidence to be the person I am today. It also created the leader I am today,” Goodes said.

“We need more programs, like John Moriarty Football, that are designed in community, for community and then have really clear pathways and programs that can help those kids in community follow their dreams.”

But it’s not just big organisations or high profile people that can get involved and help, as Singh explained.

“Get involved, it can be scary, there are so many groups who are doing so many good things. Pick up the phone, give me a call, I’d love to share some of the learnings we had,” Singh said.

“Good things take time, but it’s worth persevering with.”

John Moriarty continues to persevere, creating pathways, opportunities and friendships along the way.

Join SBS and NITV for a full slate of NAIDOC Week content. For more information about NAIDOC Week or this year’s theme, head to the official NAIDOC Week website.