Teenage striker Noah Botic says the Joeys are not going to this year’s FIFA Under-17 World Cup to make up the numbers, but are heading to Brazil to be crowned champions.

No Australian side has ever won the youth World Cup, with the country’s best result coming in 1999 when a green and gold outfit, including Josh Kennedy and Scott McDonald, reached the final against Brazil in New Zealand.

The Joeys failed to qualify for the last Under-17 tournament in 2017, and in 2015 the team, featuring Daniel Arzani and Jake Brimmer, were knocked out in the round of 16 by Nigeria.

But Botic, who recently signed for Bundesliga club Hoffenheim, believes this junior national team has what it takes to to achieve what no other Australian team has.

“We’re going there to win it,” Botic told The World Game.

“We want to make history.”

The Rockdale City Suns junior, who is the cousin of Socceroo Tomi Juric, admitted playing in a FIFA World Cup, will be surreal.

“It will be a dream come true for sure,” he said.

“Since I was maybe 10 years old and thought that football could be a career of mine in the future, the World Cup is the main pinnacle tournament you want to play at.

“Especially at the youngest World Cup possible, it’s amazing playing with these boys in Brazil. It will be fantastic.” 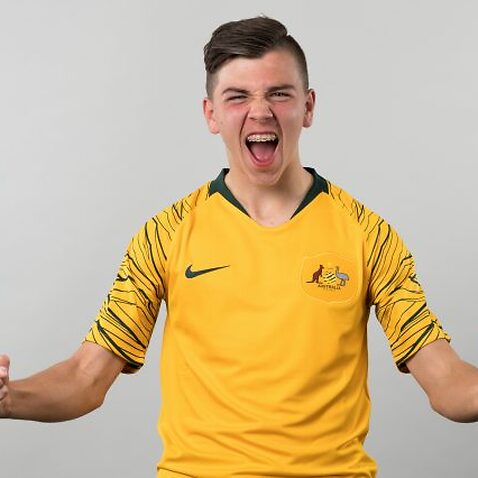 The Joeys have just finished a three-match tour of the UK where they went down 3-2 to England, defeated Korea 4-3 on penalties and were beaten 4-0 by Brazil.

Coach Trevor Morgan took 23 players to England as he considers his options before naming his World Cup squad.

“The coach is still trying out new players, he’s giving a lot of kids opportunities to see what they can do,” said Botic, who scored in the one goal defeat to the English.

“Hopefully they do well, which will be good for Trevor to have a different variety of players that he can pick from, so he’s not following unsure of who to pick.

“It was a tough game [against England]. But the boys, especially against England, it’s not easy. Playing kids that are playing with the first-team and in the Under-23s, especially with teams like Liverpool and Chelsea, they’re massive teams.

“They’re some of the biggest clubs in the world. To come away with a 3-2 loss isn’t a bad result for us. People were saying if England went to the World Cup they would be a top four team, so we had a couple of patterns of play that our coach liked and we just improve from that.

“We analyse the games and just keep moving forward.” Botic hails from Sydney and has a close bond with family member Juric.

The 17-year-old describes the former Western Sydney Wanderers forward as an inspiration and hopes one day he can share a national team shirt with him.

“He’s always been there for me,” Botic said.

“He’s my godfather so he’s always given my advice and confidence to keep pushing forward. I give him the same, it’s back and forward.

“It’s always good to have somebody like that in your family. We’ve got young cousins in the family … Deni’s [Tomi’s younger brother] playing in Zagreb in Croatia. He’s doing well.

“He’s just kicked off his season, so there’s a lot of football in the family, which is exciting because you never know what could happen. We could all potentially play for Australia, which would be good. It would be a lot of fun.”

Botic trialled with Manchester United and Everton before inking his two-year deal with Hoffenheim’s Under-19s, and the teenager is thrilled to be plying his trade in Germany.

“It’s the type of football I’m used to. We were looking at a few different clubs but I think Hoffenheim were the best for me, in terms of playing style.

“I’m really happy with the move. I had a couple of offers but Hoffenheim, it’s a good club. It’s a big move, especially coming from the NPL in Australia.

“I had a trial for a week and a half there. The coach was really happy with me, he couldn’t wait to get me there. I’ve signed and I’m going to keep training until I’m able to play.

“I’m not saying the A-League is not the best league in the world, it’s still good, but if you get a offer from Germany you can’t not take it. . I’m really excited to get started.”