Joao Felix was the star for Atletico Madrid as they bounced back in style from last week's thumping by Bayern Munich.

Atletico Madrid got their Champions League Group A campaign back on track as two goals from Joao Felix helped them to a 3-2 win over Salzburg on Tuesday.

Diego Simeone's side suffered a 4-0 drubbing at the hands of the defending champions Bayern Munich last week, but they started well against their Austrian opponents and went ahead through Marcos Llorente shortly before the half-hour mark.

Salzburg - who drew with Lokomotiv Moscow in their opening game - stormed into a 2-1 lead, though, thanks to goals either side of half-time from Dominik Szoboszlai and Mergim Berisha. But Joao Felix had other ideas, quickly drawing Atletico level and then securing all three points five minutes from time with an improvised finish.

Earlier, Joao Felix was denied a stunning opener when his spectacular bicycle kick from eight yards crashed back off Cican Stankovic's crossbar before Luis Suarez volleyed narrowly wide from a corner.

Atleti's early dominance was rewarded in the 29th minute, though, thanks to Llorente's powerful shot from 20 yards squirming through the grasp of Stankovic.

Llorente squandered a golden opportunity to double his tally four minutes later, clipping wide of the right-hand post after being played clean through by Suarez.

That wastefulness was duly punished five minutes before the interval when Szoboszlai superbly steered past Jan Oblak from 15 yards with the outside of his right foot.

Salzburg edged ahead 63 seconds after the restart when Berisha turned home at the back post from Andreas Ulmer's low cross. 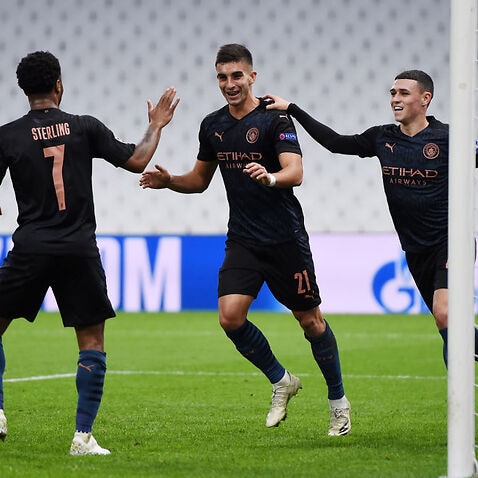 Their lead lasted just five minutes, however, as Joao Felix slotted in from close range after superb skill inside the penalty area from Angel Correa at the end of an incisive move.

The Portuguese then twice blazed over from excellent positions, but his perseverance paid off late on when Thomas Lemar's shot struck his foot and sat up kindly for him to slam home the winner.

What does it mean? Atleti stars justify Simeone's faith

Simeone said he trusted his team to bounce back from that "painful, heavy" defeat in Munich and they did not let him down.

They did it in uncharacteristic fashion, too, eschewing their usual obdurate style to play some inventive, attacking football that resulted in 19 shots on goal.

Joao Felix too hot to handle for Salzburg

Starting alongside Suarez in attack, Joao Felix was in scintillating form. The 20-year-old's two goals came from seven shots - four more than any other Atleti player - while he competed in a joint team-high of 20 duels, winning 65 per cent of them.

Trippier endures a night to forget

The England international was badly caught out of position for Salzburg's second goal, while he lost possession 21 times - more than any other Atleti player. He did make three key passes, but Trippier is unlikely to look back on this game with fond memories.

Atleti will be looking to make it three LaLiga wins in a row when they travel to Osasuna on Saturday, while Salzburg host Swarovski Tirol in the Austrian Bundesliga on the same day.