The AFC Asian Cup was a big prize but does not compare to Ange Postecoglou all-but leading Yokohama F. Marinos to a first title in 15 years.

In the weeks and months after Manchester City’s parent company City Group bought a 20 per cent stake in Yokohama F. Marinos in May 2014, they started to learn just how differently the club was run compared to any other in the global stable.

In terms of culture, it took the group a couple of years to come to terms with it all.

That is one reason why Ange Postecoglou leading Yokohama to the J.League title next weekend (all they have to is avoid a four goal loss at home to title rivals FC Tokyo, hugely unlikely even with Japan’s history of amazing title turnarounds) is hugely impressive. 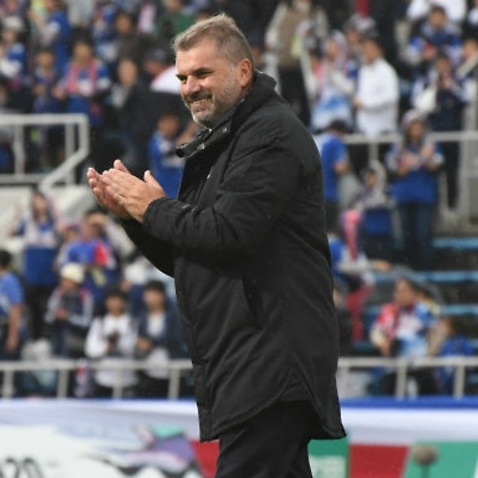 The success of the former Socceroos coach in a very tough and very foreign league and doing it on his terms is a greater achievement than leading Australia to the Asian Cup in January 2015.

A few months after that 2-1 win over South Korea in Sydney, the Asian Football Confederation (AFC) held a coaching seminar at a Kuala Lumpur hotel. One of the events included a talk from a national team coach.

In this case, it was Postecoglou who sat on the stage and told his peers how he had gone about leading the Socceroos to the Asian Cup title just a few months earlier.

The AFC asked delegates for their feedback. The general consensus: while it was interesting to learn about Australia’s success, they preferred to hear how a nation like Palestine had prepared for the tournament, a team with challenges and obstacles of all kinds the Asian big boys don’t have to think about.

It was no surprise at all that Australia, a rich nation with fantastic facilities and players in action all over the world, had won a 16-team tournament on home soil.

All the Socceroos had to do was finish above Oman and Kuwait in the group stage, then get past China and UAE to reach the final. On home soil, this was expected. The only traditional powerhouse the team faced was South Korea.

Australia lost to the Koreans in the group stage, when they could afford to, and counted themselves slightly fortunate to overcome the Taeguk Warriors in the final.

It’s all good but not a surprise.

The J.League title is a far more difficult task especially for a foreigner such as Postecoglou and especially in the way he has gone about it.

Yokohama are one of the bigger teams in Japan but have not won the title since 2004. At the end of the 2017 season, they finished fifth.

If a Japanese coach had taken the reins at that point and two years later won the title by adding a couple of players and keeping things fairly similar, then it would be worthy of praise.

But, as has been well-documented, Postecoglou brings a new philosophy to the club and a completely different football culture.

Then there is the fact his first season was a struggle in terms of results. The signs of progression were there but Yokohama flirted with relegation. It would have been easy for the club to change coach and there were rumours at one point it was not far away.

It would have also been easy for Postecoglou to change approach from his expansive and attacking game and taken a more conservative stance to avoid defeats.

He did not do so. The groundwork from that first season is evident over the slog of a 34-game campaign in a competitive league even if the way the high-scoring Yokohama play means it does not feel like a slog.

The Asian Cup was a big prize but does not compare to Ange Postecoglou’s exploits in leading a team in a tough league in a foreign country to a first title for 15 years.

And he did it his way.