For many, Euro 2020 was the final chance for Belgium's 'Golden Generation', but they are the latest team to fall victim to Italy.

As impressive as Italy were at Euro 2020 before Friday, much of that praise had been tempered – rightly or wrongly – by scepticism from some, with those suggesting their opponents to this point. and throughout their unbeaten run, had been sub-optimal.

It seemed a largely harsh assessment given they are playing at a major international tournament, though the unconvincing nature of their 2-1 extra-time win over Austria did bring with it a hint of doubt.

Regardless of whether or not the sceptics had been correct about Italy, Belgium – the number-one ranked nation in the world – were always bound to leave fans and pundits alike with perhaps a better appraisal of just how good the Azzurri are.

After all, there had been plenty of evidence to suggest Belgium had almost been the antithesis of Roberto Mancini's team in Euro 2020. While Italy had the most efforts on goal of any team at Euro 2020 (87, Belgium had 38) prior to the quarter-finals, Belgium were one of only two teams to face 20 shots in two matches along with Turkey, yet they had only conceded once.

But in Munich on Friday there only ever looked like being one winner, with Roberto Martinez's Belgium eventually running out of luck at the hand of a side that will take some beating, the Italians winning 2-1.

At least the pragmatism Belgium seemed to employ against Denmark and Portugal – when they only managed six shots per game – was less prominent here, as they reached that total by half-time.

But were it not for a fortuitous penalty just before the interval, a spot-kick converted by Romelu Lukaku, they would have been 2-0 down at the break.

Where Italy had perhaps lacked fluency against Austria, they were intensely impressive here – their ability to play straight through Belgium thanks to their exceptional ball-players in midfield was coupled with their desire to win the ball back, routinely having two men putting the pressure on.

Their press resulted in a tournament-high (joint with the Netherlands) two goals from high turnovers before the quarter-finals and a similar scenario led to the opener here, Verratti cutting out Thomas Vermaelen's pass out from the back and finding Nicolo Barella, who brilliantly held off a tackle before firing past Thibaut Courtois. 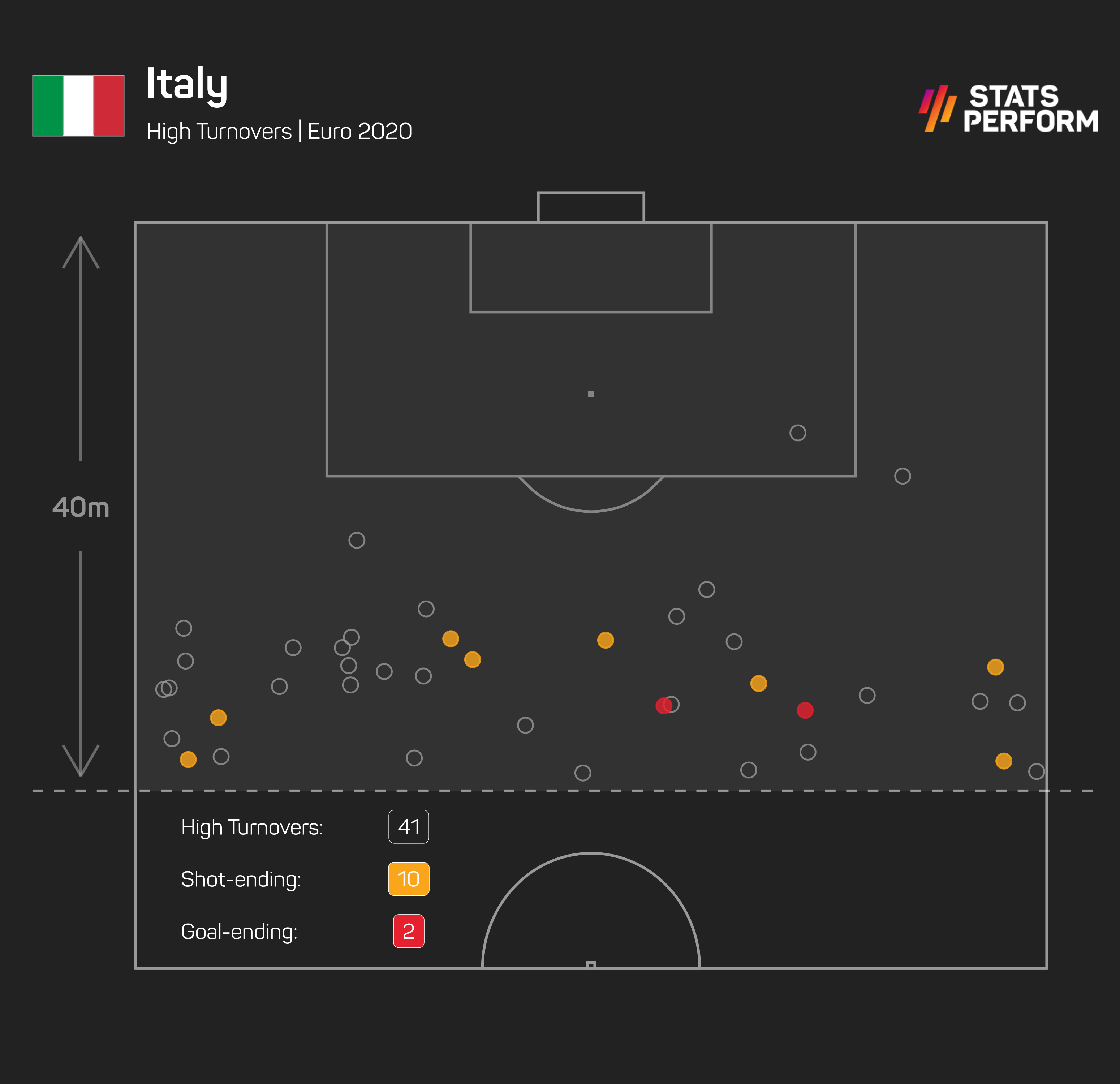 The Real Madrid goalkeeper's form had undoubtedly played a role in Belgium's progress as well, given his 1.7 goals prevented was the third-best in the tournament prior to Friday, though even he could do little to prevent Lorenzo Insigne's gorgeous 25-yard effort finding the top-right corner to make it 2-0.

Italy's approach after the interval seemed to relate more around keeping the ball, firmly aware that the less time Belgium had in possession the less likely they were to draw level. In the 24 minutes that followed half-time, the Azzurri's share of possession was 70 per cent, compared to 54 per cent in the first half.

That's not to say Belgium didn't trouble them. When attacking at pace they caused Italy some issues – Jeremy Doku beat Giovanni Di Lorenzo and played a teasing ball right across goal, but Lukaku somehow failed to net, with Leonardo Spinazzola making a vital block.

Then Dries Mertens darted through the middle and played Nacer Chadli into the same channel of the box, with his eventual delivery being deflected over Lukaku and agonisingly behind Thorgan Hazard.

But Belgium got to the quarter-finals mostly down to moments of individual quality, as highlighted by the fact their eight goals scored was way above their xG tally of 4.1, which was the lowest of the eight teams remaining.

And while Doku was a nuisance with this tendency to dribble, Belgium had little else to throw at Italy as it almost became Lukaku or bust. Their form had seemingly been unsustainable and their luck ran out in Munich. 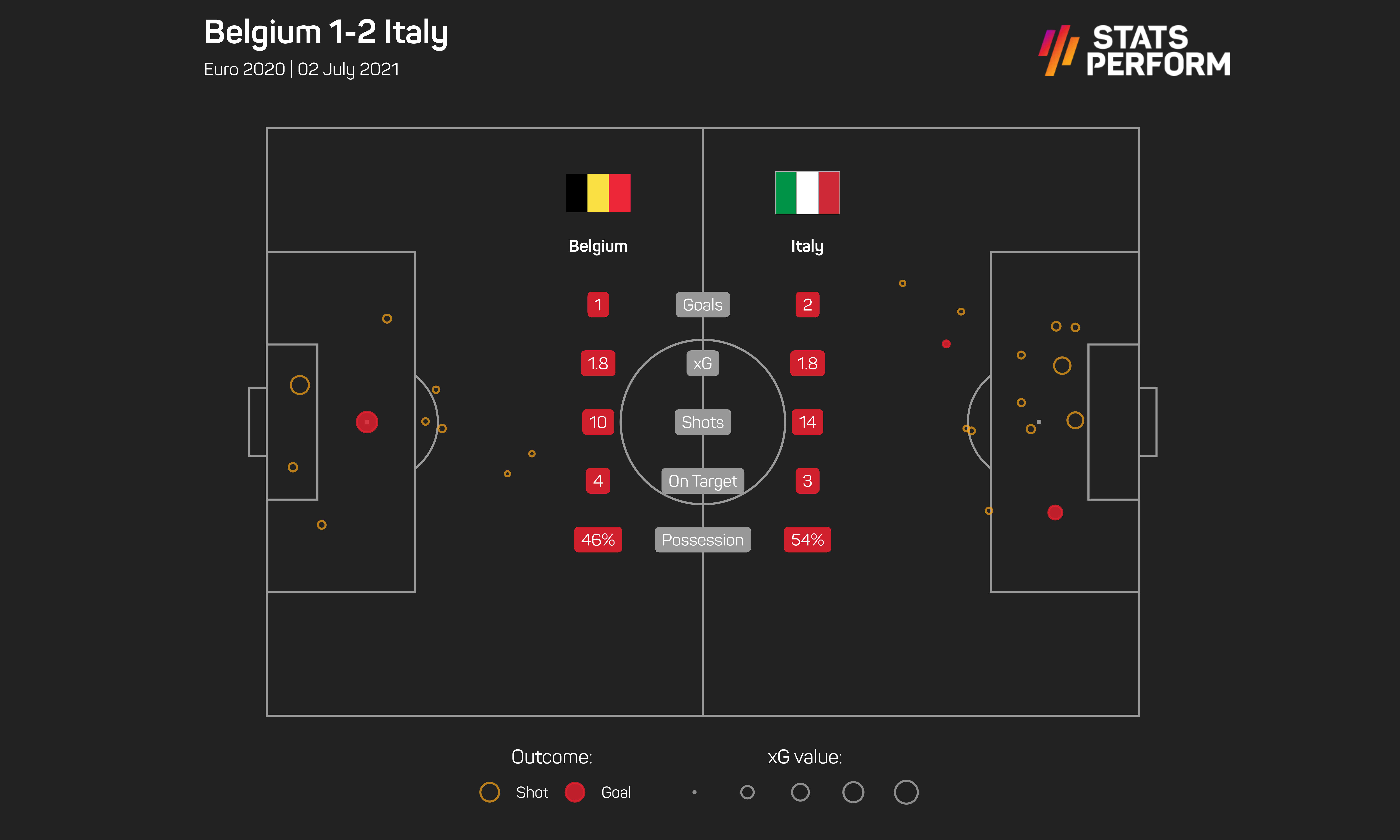 Even if Eden Hazard had been fit, given his form over the past two years it is difficult to see how things would have been any different with him on instead of Doku.

Kevin De Bruyne was passed fit and his three key passes were more than anyone else in a Belgium shirt, but it would be fair to suggest he hardly filled the same talismanic role he has become accustomed to at Manchester City. While you have to take playing styles into consideration, he averaged 81 touches per game in 2020-21, but only 51 on Friday.

His average for Euro 2020 had been 74.1 per 90 minutes. Perhaps there was an element of Belgium playing him out of desperation without him being completely fit.

Either way, Italy's first-half intensity was what set the tone for their victory, yet it was their well-rounded nature as a team that saw them get the job done – the fact they still had more shots than Belgium despite already having the lead and playing with less attacking urgency being the case in point here.

For many, Euro 2020 was seen as the final chance for Belgium's so-called 'Golden Generation' to truly leave their mark on the international stage, with a title eluding them.

But they leave the competition after getting very few people excited, with Italy making something of a statement to those who until Friday had dismissed them as flat-track bullies.