Italy and England are flying while Spain and France are doing just enough but Germany, Portugal and the Netherlands are flirting with danger in their bid to achieve direct qualification for the 2022 FIFA World Cup.

This is the situation in Europe after the first phase of qualifying for the tournament in Qatar that will take place in November and December.

The winners of Europe's 10 groups will qualify automatically for the finals and the runners-up will have to go through the minefield of a playoff to reach the promised land.

Here is a brief summation of how the 10 seeded teams are faring in their respective groups.

The European champions are fully immersed in an uncompromising battle for automatic qualification with co-leaders Serbia after three matches. 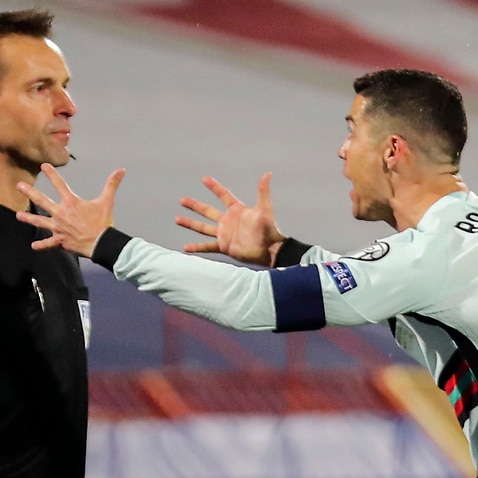 Captain Cristiano Ronaldo and his cohorts have performed patchily so far even though they would be perfectly entitled to feel robbed after CR7's last-gasp 'goal' in a 2-2 thriller with in-form striker Aleksandar Mitrovic's Serbs was not allowed. The group will most probably be decided on the last matchday when the two sides clash in Lisbon.

Coach Luis Enrique has received plenty of criticism for adopting a rotation policy in this qualifying campaign. Yet 'La Roja' are leading the race for Qatar with seven points from three matches. Spain have such an abundance of talent that it does not seem to matter what line-up they use because their attacking style is there for all to see. Second-placed Sweden will be Spain's toughest opponents. They are a point behind but have a game in hand.

This qualification phase could see the end of Zlatan Ibrahimovic's glittering international career and the confirmation of Ferran Torres as a world class striker. Olmo on target as Spain move top with win over Kosovo

The 'Azzurri' under Roberto Mancini are unbeaten in 25 matches and it is hard to see them slip up in their bid to make amends for their failure to reach Russia 2018.

Italy are still a work in progress but they have a recognised style that is pleasing on the eye and with top strikers like Ciro Immobile, Federico Chiesa, Andrea Belotti and Lorenzo Insigne to choose from they are entitled to feel optimistic. Italy's crunch match in Switzerland in the next phase of qualifying will be their sternest test. The world champions are plodding along without setting any houses on fire in a somewhat comfortable group. One feels that 'Les Bleus' were just going through the motions and using these qualifiers as a dress rehearsal for the forthcoming European Championship.

Didier Deschamps's team already have built a four-point advantage over second-placed Ukraine and with a strike force comprising Antoine Griezmann and Kylian Mbappe their march towards the finals will be unstoppable. The world's top ranked team should have little difficulty in reaching the finals after beating Wales 3-1 and drawing 1-1 with the Czech Republic.

With playmaker Kevin de Bruyne and strikers Romelu Lukaku and Dries Mertens causing their special brand of mayhem in the front third, failure of the 'Diables Rouges' to finish top of the group would be seen as a major surprise. All three were given a rest for their last match against Belarus but, no worries, the Belgians still won 8-0. The quality of their bench is just awesome.

The Danes have taken this qualifying campaign by storm and are one of only four teams with maximum points from three matches. Defender Simon Kjaer's side made their intentions very clear with a thumping 4-0 victory in Austria.

Theirs is an efficient all-round team that has yet to concede a goal and makes up for a lack of big stars with a strong temperament in true Nordic tradition. These Danes are some tough cookies.

Things are not going swimmingly for Frank de Boer's Dutch team that appears to lack the big-name stars usually associated with the "Oranje'. They were well beaten 3-1 by Turkey on matchday one and struggled to beat Latvia 1-0 before running amok against no-hopers Gibraltar.

Rejuventated Turkey lead the group by a point from the Netherlands and Norway. It's early days but there exists a remote possibility of the Dutch not making it to the World Cup. You read it here first. No shock on the 'Rock' as Netherlands put seven past Gibraltar

The 2018 World Cup's beaten finalists kicked off their qualifying campaign with a shock 1-0 loss to neighbours Slovenia but they somehow recovered to overcome battling duo Cyprus 1-0 and Malta 3-0 rather unconvincingly.

Croatia's coach Zlatko Dalic still has several of the stars that dared to dream three years ago - like Luka Modric and Ivan Perisic - so their current form comes as a major disappointment. Croatia's big test will come in the next rounds of matches in September when they travel to Russia and Slovakia.

Gareth Southgate would have had plenty to answer for had England not managed to snare a late 2-1 win over Poland that makes them hot favourites to win the group. Harry Kane's team were 'poles' apart in the first half - playing some lovely football - and led 1-0 yet they strangely opted to sit back after the break, allowing Poland to get back into the game and draw level. When it looked like a draw was the more likely outcome Harry Maguire popped up with a thumping drive for a late winner. Southgate will learn from his poor choice of tactics.

England are a very interesting side though and in captain Kane they have a true leader who continues to prove that he is not merely a free-scoring striker but a formidable attacker who is so altruistic in his approach that he is as strong in scoring goals as he is in making them for others. Maguire bails out Stones with late England winner against Poland

The four-time world champions are suddenly engulfed in a mini-crisis after crashing to a shock 1-2 home defeat to North Macedonia. Three years after they failed to even make the knockout phase of Russia 2018, the stuttering Germans appear to have a huge battle on their hands to reach Qatar. Armenia lead the group with nine points.

Germany defended very poorly on the occasion of Macedonia's two goals. But their most glaring weakness lies in attack where Serge Gnabry is not getting much support from guys like Timo Werner, Kai Havertz or Leroy Sane. The Germans are probably too strong mentally to succumb to the newest pressure outgoing coach Joachim Low is under but, my goodness, they are making it hard for themselves.