Former Socceroos keeper Zeljko Kalac believes his error that led to Croatia's second goal in the crucial group match at the 2006 FIFA World Cup wouldn't have been a huge talking point if not for his heritage.

WATCH our FIFA World Cup classic match - Australia v Croatia 2006 - this Sunday June 21 at 3:00pm (AEST) on SBS and streamed via The World Game website / app and SBS On Demand.

The man nicknamed 'Spider' found himself in the starting line-up for the final group game - ahead of Mark Schwarzer - after sitting on the bench for the 3-1 comeback win over Japan and a 2-0 loss to Brazil.

But when his chance came, Kalac said he was ready to seize it and there was no animosity from Schwarzer about the decision.

"We just got on with it," Kalac told The World Game's History FC podcast.

"We had to be there for each other, support each other and make sure we were both ready." 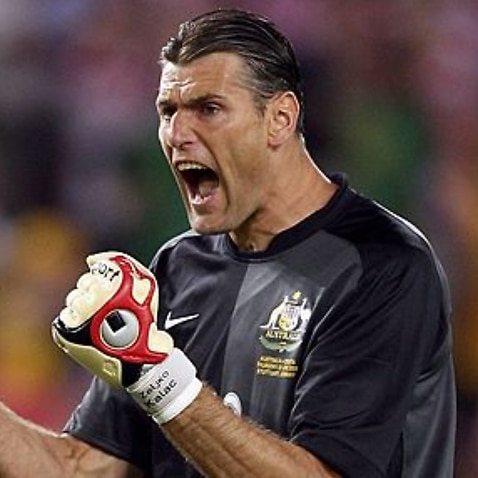 The game was a particularly special one for Kalac, and several other members of the squad of Croatian descent, which was cause for celebration among many fans as well.

"My family was there, everyone from Australia was there," he said.

"Both countries were together ... It was a real party atmosphere, that game."

In just the opening 90 seconds, Kalac was immediately tested as Darijo Srna unleashed an unstoppable free-kick to give Croatia the lead, and he admits it would have been hard to save.

"I reckon it went just past my fingers, but I probably wouldn't have been able to keep it out even if I got there," Kalac said.

"He actually struck it really really well, it went in with pace."

The Aussies had hope again - when Craig Moore converted from the penalty spot to make it one apiece, before the break.

But 10 minutes into the second half came the moment Spider and Socceroos fans will never forget.

Niko Kovac's deflected strike bobbled towards the waiting arms of Kalac but as he went to intercept it, the spinning ball bounced over him and into the back of the net to give Croatia the lead again.

A keeping howler, yes- but not worth the attention it still receives to this day, according to Kalac's assessment of the incident.

"It's a funny one, because had I made that mistake against Japan or Brazil, we probably don't even talk about it," he said.

"But because I made that mistake against Croatia with my Croatian heritage, it's like the end of the world!" Socceroos Greats - Where are they now: Zeljko Kalac

Thankfully for Kalac, Harry Kewell scored in the 78th minute to send Aussie fans everywhere into a frenzy and make Australian football history.

Guus Hiddink's men saw out the rest of the match to progress to the infamous round-of-16 clash against Italy, but not before another controversial moment when referee Graham Poll made a huge blunder in the dying minutes.

Croatia defender Josip Simunic was given a second yellow card, but somehow avoided being sent off and Kalac was as bewildered as everyone else who witnessed the incident.

"Who would have thought something like that was going to happen at a World Cup?," Kalac said.

"Things like that ... don't happen normally in park football, let alone at a World Cup!"

"I had no idea until the kerfuffle started ... what's going on here?"