Captain Lionel Messi's days at his one and only club Barcelona might be coming to a spectacular end if reports emerging from Spain are to be believed.

This could well be the best option for the little master.

A public spat between the Argentine attacker and club director Eric Abidal, who accused the players of a lack of commitment, sent the world's football media into a frenzy of rumour, speculation and innuendo.

Messi, who is regarded as one of the greatest footballers of all time, has played a huge part in making Barca one of the finest teams to grace the world game in the last 15 years.

But many pundits now believe that Messi cannot do more for the Catalan club that is in clear disarray and decline and an exit might be on the cards at the end of the season.

A clause in Messi's contract would allow him to leave the club for free should he wish to do so.

Hence the billion dollar question: should he keep enjoying superhero status among the Barca fans or seek a new challenge away from a turbulent club environment? 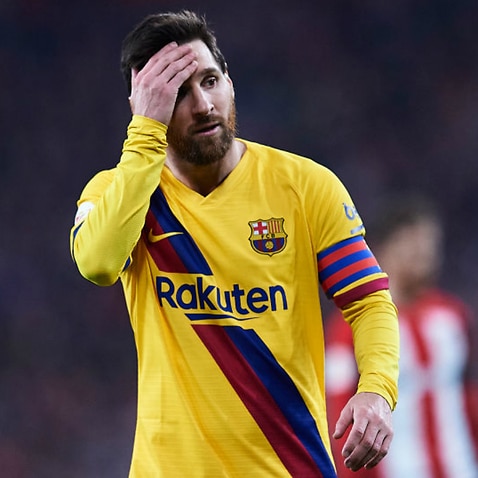 Barcelona are 'a club of clowns' with 'no class'

Messi would have many suitors but only money-no-object clubs like Manchester City, Manchester United and Paris Saint-Germain could afford him, especially since they would not have to pay Barcelona a transfer fee.

Messi's current basic salary is the equivalent of $110 million - that's more than $2 million a week - so money matters are unlikely to play a big part in the equation as far as his immediate playing future is concerned.

Which brings us to his legacy.

Since making his first-team debut in 2003-04, Messi has helped Barcelona become domestic, continental and world champions in mesmerising style.

His influence on the side is remarkable and best illustrated by one simple statistic.

Club records state that the six-time Ballon d'Or winner, amazingly, has played a part in 885 goals (622 goals and 263 assists) in 712 matches across all competitions.

In the same 16-year period Barca have scored 2241 times, meaning he has had a hand in 39 per cent of all of their goals.

Yet some of his performances and his body language of late would suggest that Messi is beginning to feel rather frustrated by the general decline of his once unbeatable side.

You suspect that he feels that whatever magic he and his fellow attackers can conjure in the front third of the field is likely to be undone by a shoddy defence that has shipped too many goals for a club of Barca's stature and ambition.

On Friday (AEDT) they crashed out of the Copa del Rey when they lost 1-0 to Athletic Bilbao thanks to some amateurish defending you probably would not expect even in the A-League.

Heavy defeats against Roma and Liverpool in the knockout stages of recent UEFA Champions League campaigns proved to be an eye-opener and may have shown the Argentine that he was fighting a losing battle in his quest to win as many honours as his stature deserves.

Messi is only 32 and in his prime. A new environment could lift his game to even more sumptuous levels and maybe help him achieve the one trophy that has eluded him so far: the FIFA World Cup.

It is very hard to imagine Messi playing for any other club than Barcelona. Same as Paolo Maldini and AC Milan, it is hard to think of one without the other.

Maldini spent his whole career spanning two decades with the Rossoneri but indications are that Messi might not be inclined to follow in the Italian defender's footsteps.

Should Messi move away from the Camp Nou he could be seen by Barcelona's cules (supporters) as unappreciative or even disloyal.

Messi was born in Buenos Aires and could have signed for River Plate when he was 11 but the club refused to pay for the medical treatment the player's growth hormone deficiency badly needed.

Barca stepped in, signed him up and were happy to pay all his medical bills,

The club's foresight and investment would reap rich dividends because their acclaimed La Masia academy turned a precocious kid with stars in his eyes and magic in his boots into the world's finest footballer.

Of course Messi has been remunerated very handsomely in the process - his net worth is estimated to be almost $450 million - but he kept his end of the bargain too.

Since making his breakthrough as a starter in 2005 he helped the Blaugrana win a staggering 34 trophies, among them four Champions League titles (he was injured for the 2006 final) and 10 La Liga championships.

It has been a marriage made in heaven ... but will it be all over in a few months?