In tandem with Dutchman John van ’t Schip - whom he previously partnered in clubland at Melbourne City and PEC Zwolle - Valkanis is riding a wave of popularity with the Ethniki, after helping mastermind last week’s surprise 1-1 draw with thoroughbreds Spain in Granada.

But with a friendly against Honduras tomorrow (AEDT), and then the blockbuster World Cup visit of Georgia three days later, Valkanis knows the fates can quickly turn and the time for congratulation is already long past.

Twenty months of rolling with the turbulent tides which lap one of world football’s most volatile shores (just ask ex-Xanthi coach Popovic) has taught Valkanis to take nothing for granted.

“The football environment here is tough, there is no doubt about it,” he said.

“It’s challenging and its results driven. You have to accept the pressure of football in Europe because that’s just the way it is. 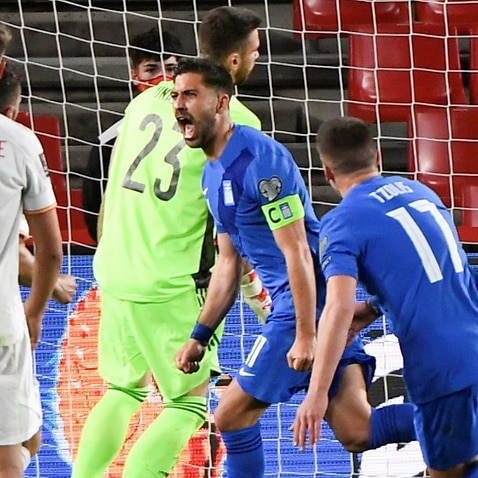 “We’re trying to get back to a winning culture with this team and hopefully one day the heights of 2004 (when Greece were crowned European champions).

“It’s brutal at times but we love it. You have to embrace the pressure.

“For me, coming from a Greek background, all my football steps were in Australia. You take that with you everywhere.

“You feel that pride of being a Greek-Australian and the connection that we have.”

Valkanis acknowledges the aforementioned departures of his Aussie brethren, all within a season or less, are just part of the job description.

“These things will happen - it’s part of coaching but you have to keep on learning and move forward,” he said.

“For those guys, that’s what they’ll do. They’re good coaches and I’m sure they’ll get gigs and hopefully in Europe.

“Sometimes I think we’re like gladiators in the arena - a bad result and you get smashed.

“People are waiting for bad results. But you need to stay positive and keep believing in the work you do.

“They’ll be more Australian coaches in Europe ... I have no doubt about that.”

Reflecting on the draw with Spain, Valkanis said: “Spain are a fantastic football nation and coming into the game they’d gone around 63 unbeaten in World Cup qualifiers,” he said.

“It was always going to a huge ask for us, but the boys really stepped up and to get away with a point was a great start to the campaign for us.

“The result showed you what the culture is like within our team.

“We were up against one of the innovators of the game over the past decade or so.

“We’ve always said since taking over we weren’t going to lose the DNA Greek teams have within them, which is the ability to defend.

“And they had to defend non-stop like heroes against a Spanish team which had a lot of possession but didn’t create too many chances.

“A point against Spain in Spain is a tremendous first step for us in this group (which also includes Sweden, Kosovo and Georgia).

“We’ve been analysing Georgia for a while - they lost to Sweden but performed really well and might even have won the game.

“But we’re at home - the Spanish result gave us a lot of confidence and it’s a really important game.

“Our next qualifier isn’t until September and we need to finish this month on a high note.”