With Son Heung-min's form reminiscent of peak Harry Kewell, questions are now being asked whether the South Korean has hit heights never before reached by an Asian male player.

With 10 goals and three assists in 11 Premier League matches this season (plus three goals, three assists from six in Europe) Son has lifted his game to be among the best in the world in his position.

Son would probably start for any club in the world right now. If Son were to be crowned the Premier League's best, it would add further evidence to his claim for the title of Asia's best ever, but should he be already considered the continent's greatest of all time?

Ever since becoming a full-time starter back in 2012 when still at Hamburg, Son has hit double figures for goals in every season except his first at Spurs. To do so in eight of the last nine seasons is an incredible and consistent return across the Premier League and Bundesliga, especially considering he rarely plays as an out-and-out striker.

He's scored three goals at the FIFA World Cup, and was also the driving force behind Spurs' against-the-odds charge to the 2019 UEFA Champions League final, which was done largely without the injured Harry Kane, earning him a Ballon d'Or nomination. 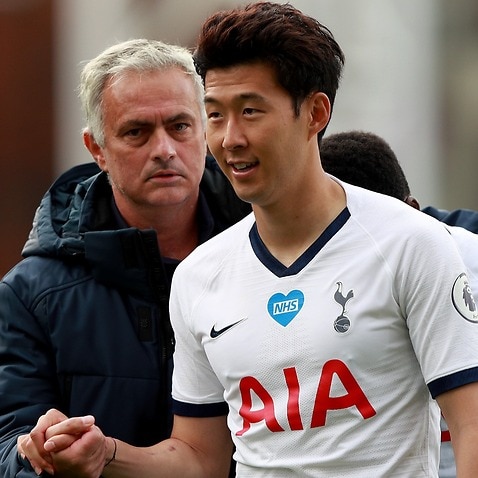 Has any Asian player been as unstoppable as Son is right now? Has any ever been this important to a big club in an elite league? Has any ever had this amount of consistent goal involvements?

Bear these questions in mind comparing Son to Asia's other great talens:

98 caps and 37 goals for Japan shows why Honda was considered Asia's best attacking midfielder for some time. He won the 2011 Asian Cup and was named MVP of the tournament. Honda scored and assisted in three World Cups and also won the Russian Premier League, as well as, two Russian Cups with CSKA Moscow. In the 2010 Champions League, his free-kick goal helped CSKA knock out Sevilla, making him the first Japanese player to score in the knockouts of the tournament and the first to reach the quarter-finals. Creative, technical, dead-ball specialist - Honda pretty much had it all, but he did not shine in Serie A, the only four seasons he spent in a top league.

Australia's all-time leading goalscorer with 50 in 108 caps and also the hero of a stunning amount of important moments. The country's best-ever high-pressure player, delivering when needed most. Cahill was the first Aussie to score at a World Cup before going on to find the back of the net at three World Cup tournaments to finish his career as the most prolific player at the World Cup from the Asian Football Confederation. Cahill also tasted victory in 2015 when he was apart of the Socceroos Asian Cup winning squad. The Australian is an Everton great thanks to his ability to score from midfield in the Premier League. Not as technical or naturally gifted as Son or some of the others on this list, but so important in big moments.

If this debate was based on major titles won then Park Ji-Sung would win hands down. The former Manchester United midfielder has claimed 19 major trophies in his career including four Premier League titles and one Champions League with the Red Devils, two Eredivisie titles and a UCL semi-finals appearance with PSV, while also reaching the semi-finals of the 2002 World Cup with South Korea. Park was also the first Asian player to win the Champions League. he was named man of the match four times while playing for Korea at the World Cup. In 2005 Park was a Ballon d'Or nominee. Rotated heavily at Manchester United, Park was often saved for big matches. Not as important to the team as Son and nowhere near the goal involvements.

An absolute trailblazer for Asian players in Europe, Cha had an excellent Bundesliga career which spanned more than a decade. Cha hit double figures for goals in three seasons each for Eintracht Frankfurt and Bayer Leverkusen and won the UEFA Cup twice, as well as a German Cup. Cha is Korea's all-time highest scorer and most-capped with 58 goals in 136 appearances. What makes that even more impressive is he did so without playing for his nation for seven years to focus on club football. Didn't score in the World Cup like Son, but is serious competition for the Spurs star.

Another of Japan's greats, Nakata was his country's poster boy when hosting the 2002 World Cup. An agile, technical centre-mid with excellent passing, Nakata forged a successful seven-year career in Serie A when it was still the best in the world. After winning the league with Roma in 2001, he became the most expensive Asian player ever when Parma bought him for (the equivalent of) €25 million - a record held for 14 years till Son broke it when Spurs purchased him from Leverkusen for €30 million. Another pioneer, but not as devastating on the pitch as Son.

Rivals Son in terms of sheer talent and skill, and positionally probably the best comparison. Practically unplayable during his peak at Leeds United and wanted by some of Europe's biggest clubs, including Manchester United and Barcelona. Supreme dribbler with speed, strength, and a wicked shot. Not as consistent as Son and not the same amount of goal involvements, though he was very affected by bad injuries.

Like Kewell, hard to leave out based on sheer ability. A different position and very different type of player to Son, but his goal tally rivals the Korean's nonetheless. After moving to Europe, Viduka's strike rates at Dinamo Zagreb, Celtic and Leeds were simply superb, including double figures for four straight Premier League seasons - one of them a 20-goal haul. Didn't produce for his country as often as expected though.

'Arabian Jewel' Abdullah is considered his nation's greatest, holding the goalscoring record with 71 strikes in 116 caps. He is also the Saudi Pro League's all-time top scorer, with 189 goals in 194 games, where he spent his entire career at Al-Nassr - which is a bit limiting when it comes to international GOAT discussions. He won the Asian Cup twice, though, as well as eight domestic trophies.

International men's football's all-time highest scorer with 109 goals from 149 caps, a stunning record. First Asian player to play in the UEFA Champions League. Bundesliga winner and UCL finalist with Bayern Munich, though not in a major role. Never a protagonist in one of the world's top league's like Son is.

Has to be included for being part of Jurgen Klopp's back-to-back Bundesliga-winning Borussia Dortmund side. Kagawa had serious X-factor, but never took off at Manchester United and, despite a decent Dortmund return for a while, sadly never really reached his peak. A technical, fast talent, Kagawa will probably be looked back on as unfulfilled potential despite an impressive Japan career with 31 goals in 97 caps and winning the 2011 Asian Cup.

Another of Saudi Arabia's greats, their second-highest scorer, Al-Jaber won the 1996 Asian Cup. But, like Abdullah, he spent his entire career at one Saudi club, Al-Hilal. He won the AFC Champions League twice with them, as well as 15 domestic trophies. Never tested in one of the world's top leagues.

If you're not yet convinced Son's the best, you probably will be by the end of his career.

He may well put the discussion to bed by winning a major trophy or individual honour, but even without them, his overall talent, importance, versatility and consistency should be enough.