Out-of-favour Mat Ryan would generate “a lot of interest” were he to decide to look for a future beyond Brighton & Hove Albion, according Socceroos back-up coach Rene Meulensteen.

Replaced by up-and-comer Robert Sanchez for the Seagulls’ goalless midweek draw against Fulham, Ryan won’t start in Sunday’s survival clash against Sheffield United, leading to speculation he may seek a move during the January transfer window.

Former Manchester United assistant Meulensteen isn’t advocating Australia’s number one follow that path, but believes it could become an option if Sanchez, 23, is handed an extended run by boss Graham Potter.

“Who knows what will happen,” he said.

“From Maty’s perspective he’ll need to look at the situation and perhaps (it will reach a point) where he feels he may need to move on, I don’t know.

“There’s obviously a transfer window around the corner - and if it becomes clear Brighton want to take a different course he’s the type of goalkeeper who will generate a lot of interest.

“He’ll want to keep playing at his age (28), especially with a lot of international football hopefully just around the corner.” 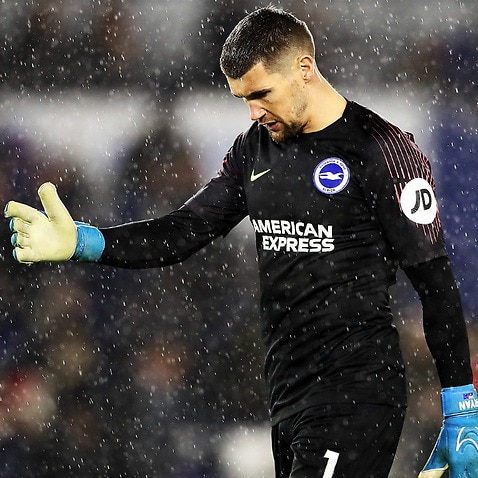 Ryan's Brighton future in doubt after being dropped for Fulham clash

Ryan has only missed only one Premier League match outside of international commitments since signing a five-year deal in 2017.

But he wasn’t even on the bench at Craven Cottage, with Potter later lauding Sanchez, declaring: “Sometimes you have to give a player the opportunity to show what they have got.

“Rob, he has some incredible attributes that we wanted to use and incredible potential.”

Potter added that Sanchez would keep his spot against the Blades.

Despite the endorsement, Meulensteen believes the pendulum could easily swing back towards Ryan.

“Maty’s used to being the first choice at his club, and is a very experienced keeper now at Premier League level,” he explained.

“For now it’s a case of not drawing too many conclusions, not throwing your dummies out of the pram and just taking things game by game and see where it goes.

“What’s happened is part and parcel of football ... you can’t be too shocked about it.

“These things happen - managers are entitled to try something different. “Sanchez might get injured in the next game and everything changes again. That’s the way football is.

“Mat just needs to make sure he keeps working hard and doing what he can do in training.

“Whatever way you look at it, things will work out in the end anyway.

“The manager has made his decision for whatever reason and Sanchez did well against Fulham.

“But with young players you always get a level of inconsistency, whilst Maty has proven his worth many times over.

“Things can change very fast in football - Sanchez might be a very good keeper but the one thing Maty has is experience.”

Meulensteen theorised that Potter’s decision may have been prompted by the club’s plunge to within two points of the drop zone.

“Clubs will always look to maintain their Premier League status, and will do whatever it takes,” he added.

"If they think Sanchez is part of the answer, then we’ll see over the next few games.

“If you look at Maty’s performances I think they’ve been good and the goals he’s conceded, there wasn’t much he could do.

“Brighton are in a bit of a catch 22. The owners want to play a certain way, which Potter wants to bring in, and that’s great.

“But playing more expansively they lose out on the defensive side, albeit they’ve been unlucky in a few games where they were by far the better team.

“Under (former coach) Chris Hughton they were very defensive and there was no playing out from the back.

“Potter has changed that - but now they find themselves with their Premier League status under pressure, and that’s when clubs sometimes backpedal.”