Zlatan Ibrahimovic claimed he has "sent Denmark into retirement" after firing Sweden to Euro 2016 with three goals in a 4-3 aggregate play-off victory. 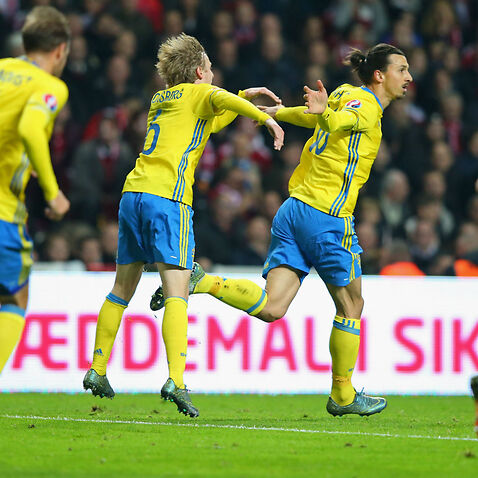 The Paris Saint-Germain forward, who has revealed he will retire from international football following Sweden's Euro 2016 campaign, opened the scoring with a deft half-volley midway through the first half of a 2-2 draw in the second leg in Copenhagen on Tuesday, before seemingly putting the outcome of the tie beyond doubt with a stunning free-kick after the interval.

And while late goals from Yussuf Poulsen and Jannik Vestergaard levelled proceedings, it was not enough for the hosts to spoil Sweden's party, meaning Morten Olsen's 15-year stint in charge of Denmark has ended in underwhelming fashion.

And speaking to reporters following the final whistle, Ibrahimovic - who had never scored against Denmark before netting the winner in the first leg and two more in the return - did not miss his chance to have a jibe at Sweden's Scandinavian neighbours.

"Denmark wanted me to retire [tonight]," the 34-year-old said. "But I just retired their entire nation."