Donald Trump says he will not watch United States football matches or the NFL if players do not stand for the national anthem.

The United States Soccer Federation (USSF) this week voted to repeal a policy requiring players to stand while The Star-Spangled Banner is played before games.

USSF put that policy in place after Megan Rapinoe kneeled in solidarity with Colin Kaepernick, who first took a knee in 2016 in protest against police brutality and the systematic oppression of black people and people of colour in America. 'We apologise' - U.S. Soccer lifts ban on kneeling for anthem

President Trump responded to a tweet with a story on Gaetz's comments by posting: "I won't be watching much anymore!"

Responding to another tweet on the subject, Trump wrote: "And it looks like the NFL is heading in that direction also, but not with me watching!"

The issue of kneeling has been a hot topic once again following the death of George Floyd while in police custody in Minneapolis last month.

Several high-profile NFL players including Patrick Mahomes and Michael Thomas created a powerful video that asked the league to condemn racism and admit it was wrong for "silencing our players from peacefully protesting". A video from NFL commissioner Roger Goodell in response conceded the NFL was "wrong for not listening to NFL players earlier" as he said they were encouraged to peacefully protest.

Though there was no direct reference to taking a knee for the anthem or refusing to stand, Trump reiterated his stance on the issue.

He tweeted: "Could it be even remotely possible that in Roger Goodell's rather interesting statement of peace and reconciliation, he was intimating that it would now be O.K. for the players to KNEEL, or not to stand, for the National Anthem, thereby disrespecting our Country & our Flag?"

New Orleans Saints quarterback Drew Brees apologised after criticising players who kneel during the anthem, stating he realised the form of protest was "not an issue about the American flag." 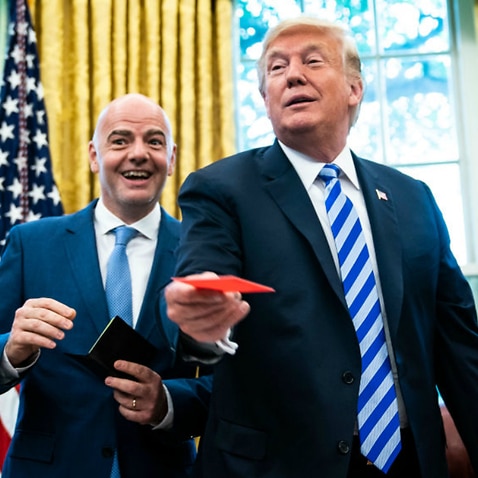