Landon Donovan, the most accomplished player in American football history, is talking about winning championships with his new team in Mexico.

Donovan is returning from retirement for the second time in three years, this time with Club Leon.

He was cheered loudly by hundreds of fans during a brief ceremony Tuesday (AEDT), an unusual site not seen for Leon since Mexican great Rafael Marquez signed with the club in 2014.

"I'm very excited, I did not expect that, it was amazing, now I just want to play and be on the field," Donovan said in Spanish at a news conference.

"It is Monday and very late and people are here. Now I need to talk to the coach to set a plan because it's been over a year since my last professional game and I will need time, but I'm motivated, I want to win championships."

The 35-year-old Donovan arrived in Mexico last week while rumors swirled about a possible comeback. He announced last Saturday night (AEDT) he was coming out of retirement to play in Mexico for the first time in his career. 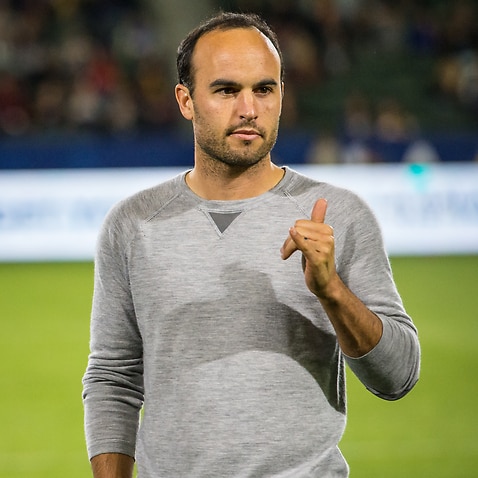 Donovan coming out of retirement to play in Mexico

"I don't believe in walls, I always wanted to play in Mexico because I grew up in California playing with Mexicans since I was like 8 or 9 years old," Donovan said, who's the career scoring leader for the United States national team and in the MLS.

Former U.S. players Marcelo Balboa and Eric Wynalda have played for Leon. Currently, William Yarbrough is the starting goalkeeper for a Leon team that has won seven league titles.

"I spoke with Marcelo Balboa about the city and also with Omar Gonzales (who plays for Pachuca) to know more about the country," Donovan said.

"I also spoke a lot with (former Puebla player) DaMarcus Beasley because I wanted to know as much as possible. I know that the league is different to the U.S. and to England, I think the style of play suits me, I used to play with Mexicans so my style is more Latino and I think I can be successful. That's important for me".

Leon reached the quarter-finals last season and will be a stronger side for the Clausura tournament after signing Giles Barnes (Orlando City), Emanuel Cecchini (Malaga) and now Donovan.

Despite not playing for nearly two years, Donovan has created a lot of expectation. The main sports networks in Mexico devoted plenty of air time to the move, and Donovan's jersey sold out at the stadium before a game against Toluca on Sunday (AEDT).

The brave don’t live forever but the cautious do not live at all. I’m excited for this new adventure 😎⚽️🦁💚

"I think it's a good move, he's a very skilled player, just remember how he used to make life difficult for us when he played for the U.S. team against Mexico," Tigres coach Ricardo Ferretti said, who briefly managed the Mexican team before the arrival of Juan Carlos Osorio.

Donovan returned to the LA Galaxy of MLS in September of 2016 following a 21-month retirement and appeared in nine games. He hasn't played professionally since November 6, 2016.

Donovan played in three FIFA World Cups: South Korea and Japan 2002, Germany 2006 and South Africa 2010. He also played in six Gold Cups and won four titles. He scored 57 goals playing for the U.S. national team and 145 in the MLS.

Donovan has done broadcast work since retiring and was rumored to be considering a run for U.S. Soccer Federation president. Donovan announced in November that he would not seek the position.