Frozen out at Hertha Berlin, frustrated Socceroos winger Mathew Leckie will seek a move away from the German club at the end of the Bundesliga season.

A regular in the past two seasons with Hertha, Leckie has only made five appearances in the 2019-20 campaign and wasn't even on the bench in last weekend's 3-0 win over Hoffenheim as the season resumed after the COVID-19 enforced suspension.

Leckie said he's at a loss to explain being overlooked, especially as Hertha have struggled in a season that began with new owners and ex-German international Jurgen Klinsmann taking over as coach.

Klinsmann's reign lasted just 10 games and Leckie said new big-money arrivals were constantly being selected ahead of him despite disappointing performances.

"I sort of had a feeling that it would be a tough year. I was thinking about leaving already at the start of the season but my wife was pregnant ... we had the hospital and everything set up, so for family reasons I decided to stay here for another season," Leckie told the Fox Football Podcast.

"The frustrating point is just that pretty much the opportunity hasn't come around to even have the chance to play well.

"Just a change is what's needed. Obviously, I'll try to get a move in the summer, it's just finding out what's the best thing to do." 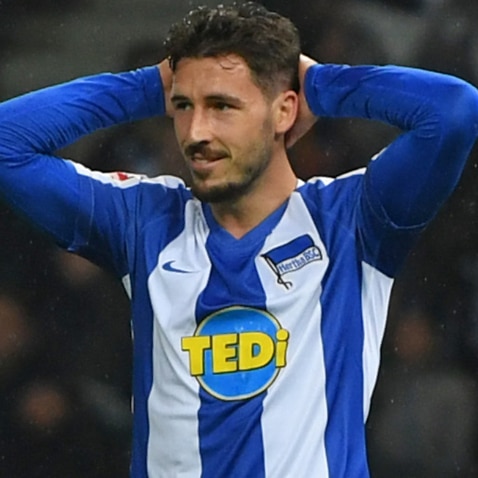 Leckie, Borrello lead the way as Socceroos return to action

While Leckie has decided his time at Berlin is at end, he admits he doesn't know where his future lies.

Having been in Germany since moving from Adelaide United to Borussia Moenchengladbach in 2011 and with a German wife, Leckie may well look to stay in the country.

But the 29-year-old said a return to Australia shouldn't be dismissed.

"It's definitely not out of the question," Leckie said.

"Obviously you want to play at the top level for as long as you can and that's 100 per cent the way I think as well, but I just need to see what my options are and see what sort of opportunities I have."