Cherchesov was about to address the media in his post-match press conference when he suddenly upped and left, leaving man of the match Denis Cheryshev to field questions.

On his return to the room, the former Legia Warsaw boss revealed who had called at such an inconvenient time.

"It was the head of state who called me to give congratulations to the team and the performance they put on," he said of Putin, who had earlier opened the tournament alongside FIFA president Gianni Infantino.

"He asked me to tell them to keep playing like this." 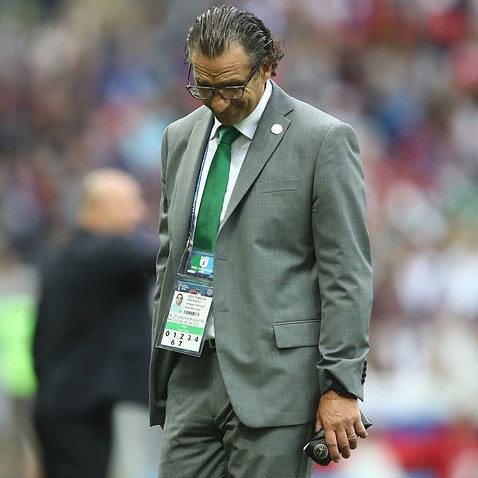 Cherchesov, widely criticised by the local media heading into the tournament, was quick to play down expectations despite the emphatic nature of the win, which came courtesy of a sublime Cheryshev double and further strikes from Yuri Gazinsky, Artem Dzyuba and Aleksandr Golovin.

He added: "We are not trying to silence anyone, we are just doing our work.

"It's just the beginning. We won 5-0 and we got three points. However, we could have played out a 1-1 [draw], nothing would have changed.

"This is a tournament, we need to get points and qualify from the group.

"We have the experience of the Confederations Cup [last year] when we won the first game 2-0 but it didn't get us very far. "I know the players gave 100 per cent and we saw the proof that they are on the right track. We need to turn the page and focus on the next step."

The only blight on a dream night for Russia was a first-half injury to star playmaker Alan Dzagoev, who pulled up with a hamstring injury that could rule him out for the rest of the tournament.

"We don't know the complete picture," said Cherchesov. "He was in severe pain and he couldn’t keep running. From experience he could be out of the tournament.

"Tomorrow he will be assessed. I don't want to spread incomplete news but through the press we will announce his condition. We'd be very sad to lose the player, we don't have many players of this level, he would be a big loss."