Kevin De Bruyne claimed he is baffled by the current interpretation of the handball rule after Manchester City once again fell foul of VAR against Tottenham.

Spurs dug in for a 2-0 win thanks to goals in each half from Son Heung-min and substitute Giovani Lo Celso, moving them to the top of the Premier League table after a performance which delighted boss Jose Mourinho.

By contrast, Mourinho's old rival Pep Guardiola finds his side languishing in 10th with 12 points from eight matches, although they were entitled to be frustrated when a marginal handball call went against Gabriel Jesus when he set up Aymeric Laporte for what briefly looked to be a first-half equaliser.

Referee Mike Dean consulted the pitchside monitor, with the replay showing the ball brushed Jesus' bicep on the hem of his shirt sleeve. 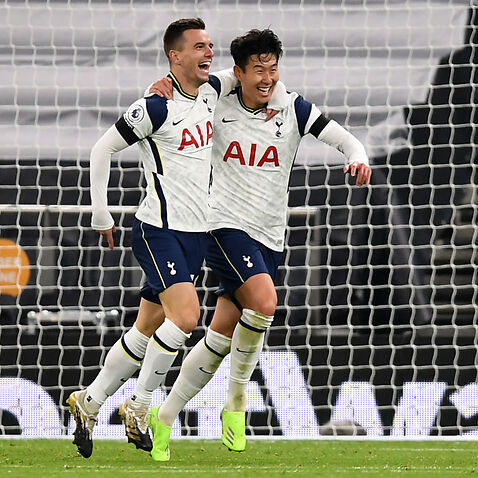 The latest guidance on handball from the International Football Association Board (IFAB) stipulates the "T-shirt line" should be used to differentiate between where the shoulder ends and the arm begins in terms of legal and illegal playing of the ball.

"I don't know the rules anymore honestly," De Bruyne told Sky Sports, with the same combination of Laporte and Jesus denied by VAR when the sides drew 2-2 at the Etihad Stadium last season – a match that followed the remarkable drama of the sides' 2019 Champions League quarter-final.

"I thought if it's above the arm here [above the bottom of the sleeve] that it’s not handball anymore.

"Everybody knows that it hits him here. I don’t know the rules.

"If you will listen tomorrow or the day after they will come on whatever channel and the referee will say it's a good decision, so it really doesn't matter.

"I've been playing professional football for 12 years and in the first nine years there were no rule changes. Now there are a lot of rule changes.

"I don't know why. Football is a nice game. The people making the rule changes need to be in the game."

Another familiar aspect of City's performance was combining a dominance of possession with a lack of cutting edge in attack and defensive fragility.

The visitors had 22 shots, with half of those blocked, to Tottenham's four. Son's goal was Spurs' only attempt of the first half and City had accounted for 66.4 per cent of possession by full-time.

Guardiola highlighted Laporte's decision to charge out of the defensive line to challenge Harry Kane in the build-up to an opening goal when Rodri and Joao Cancelo also appeared culpable, but De Bruyne believes he and his attacking colleagues must take a significant share of the blame.

"I think we played well but we missed that cutting edge," he said.

"To keep Tottenham to about three or four chances, that's quite good. But if you're not sharp enough in front of goal, which is happening lately, it's not enough." Jesus and fellow striker Sergio Aguero have spent time on the sidelines this season, with the latter on the bench in north London alongside Raheem Sterling, who suffered an injury while on England duty.

"Obviously it's been up and down with the players going in and out," De Bruyne added. "It's very difficult for players to come back from injury and be sharp. It's difficult to find consistency.

"I think the first two-thirds of the pitch we played well, but the end needs to be sharper. That will come, hopefully sooner than later."

Victory settle for draw after blowing two-goal lead against Chiangrai