With Mathew Leckie imminently exiting the Bundesliga, fellow Socceroo Ajdin Hrustic will be the only Australian left standing in one of Europe’s paramount leagues next season.

But if the burden of expectation gnaws at him, the 24-year-old attacking weapon isn’t showing it.

Hrustic opened his account for Champions League qualification chasers Eintracht Frankfurt last weekend, with an instinctive, innovative equaliser in the 1-1 draw with Mainz 05. 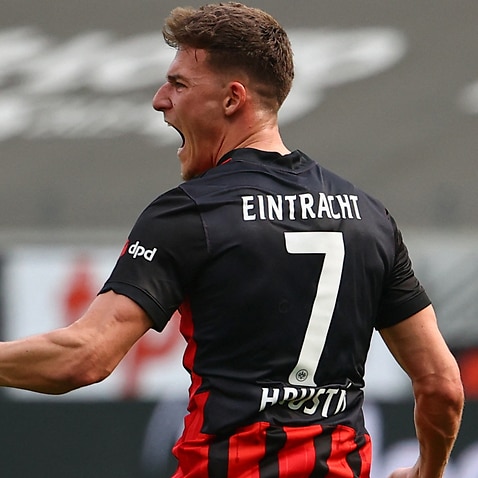 His appearance off the bench after 29 minutes with the ninth of his debut Bundesliga season.

“You look at what Mathew Leckie has achieved over his ten years in Germany, and in my case I’ve made an important step in my career now,” said Hrustic.

“It takes time. Its a new country, a new team and a new culture (after three years with Eredivisie side Groningen).

“It does take a while, although having said that I feel I’ve settled in really well.

“Everything comes at the right time and I’ve been patient and have been working hard. I guess it all pays off in the end.”

Hrustic is still just tinkering at the edges of his talent, with the final layers yet to be peeled away to reveal a finished product of anticipated football beauty.

“The boys were really happy for me to get of the mark. It was an Important goal, not just for myself but for the team because it keeps our hopes alive for the Champions League,” he added.

“That’s what counts. I’m ready to be involved at any time - whether that’s five minutes, 20 minutes or not all.

“I respect the manager’s decisions and just keep working away.

“I’ve always followed this league. It’s one of the best in the world with some amazing players and stadiums.

“You can only feel proud of yourself to be at a club like this in a league like this chasing a Champions League spot for the first time in our history.”

Eintracht are fifth, a point behind Borussia Dortmund going into the final two rounds.

The Schlappekicker’s former sporting director Fredi Bobic - a Bundesliga legend and former Germany international striker in his own right - signed Hrustic for a reason before departing for Leckie’s Hertha Berlin earlier this year.

Hrustic has long been seen by the Socceroos coaching staff as an emerging X-factor player capable of moments of outrageous intuition.

Melbourne-born Hrustic is brimming with belief heading into camp for next month for the World Cup hub clashes with Kuwait, Nepal, Taiwan and Jordan.

“It’s been 18 months since we’ve last seen each other (as a result of Covid fixture cancellations) and I’m a few steps ahead of when we last saw each other,” he said.

“I’m always ready to put on the green and gold shirt and can’t wait to be honest.

In reference to his ability to operate as a controlling midfielder, a number 10 or on either wing, Hrustic responded: “Where I play (for either club or country) doesn’t matter as long as I’m on the pitch.

“I want to play at the World Cup - that’s been my dream since I was a young boy.”