Benedikt Howedes believes Germany boss Joachim Low was right to drop him at right-back in favour of Joshua Kimmich for the 1-0 Group C victory over Northern Ireland. O'Neill makes no apologies as Northern Ireland advance to last 16

Mario Gomez scored the only goal after 29 minutes and it required heroics from Northern Ireland goalkeeper Michael McGovern to restrict the world champions, as they secured top spot in the group with their most convincing performance on the tournament to date. 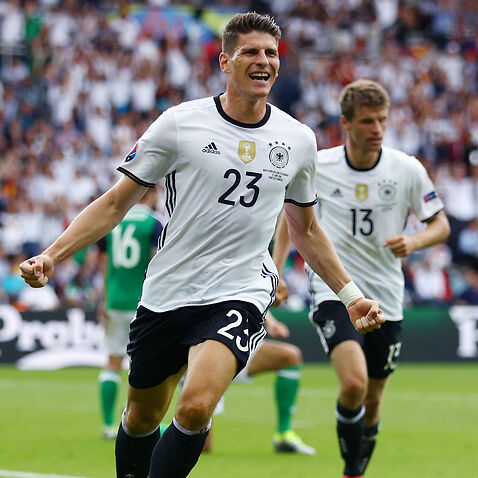 Bayern Munich youngster Kimmich was instrumental in some of the world champions' best work, with wonderful range of passing from right-back lying at the root of many of their best moments.

Low told a post-match news conference that the 21-year-old's attacking qualities made him an ideal alternative to the more prosaic Howedes when faced with Northern Ireland's well-stocked defence, and the Schalke defender was not about to disagree.

"He absolutely inspired the game," Howedes said of Kimmich.

"It was the right decision of the coach to choose the more offensive variety.

"Joshua did very much for the game, he was dangerous, and put in some good crosses."

Forward Thomas Muller endured a frustrating afternoon as he hit post and crossbar, while finding his match in McGovern.

"We all know that we were lacking goals," Muller said. "You can't be 100 per cent happy, when you missed that many opportunities.

"I myself could have reached Gareth Bale in the goal scorer ranking in the first half alone."