"There will never be another Australian team like that," said Frank Juric, motioning to a photo on the wall with the tagline "January 1996". "Horvat, Stabba, Simunic, Cervinski, Pondeljak, Kovacevic, Tiatto." And the great goalkeeper is probably right - never mind that Mark Viduka left for Dinamo Zagreb the year before.

We’re under the main grandstand at Knights Stadium, in the groundsman’s room - which looks like something out of the Derby County scenes in The Damned United - and Juric is relaxing with a cold beer and pondering the past.

"This my club, this is my home and this is our history," he said, motioning around at the walls, filled with the glorious moments and team photos.

"But it’s not about the politics, we just love football."

He sure loves it tonight (Wednesday). The Melbourne Knights - his boys - are in the final 16 of the FFA Cup. All around us, Somers Street is a hive of pure excitement.

They reckon they can win the whole thing. Why not? 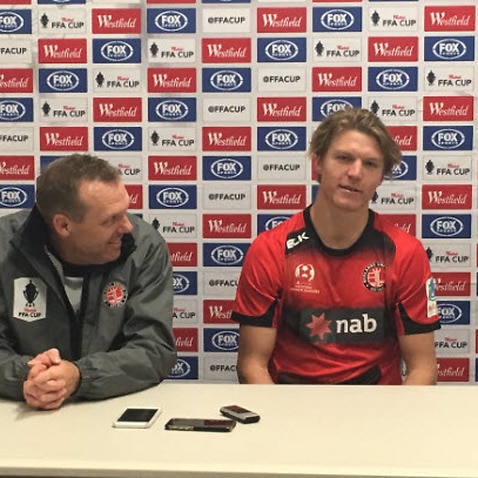 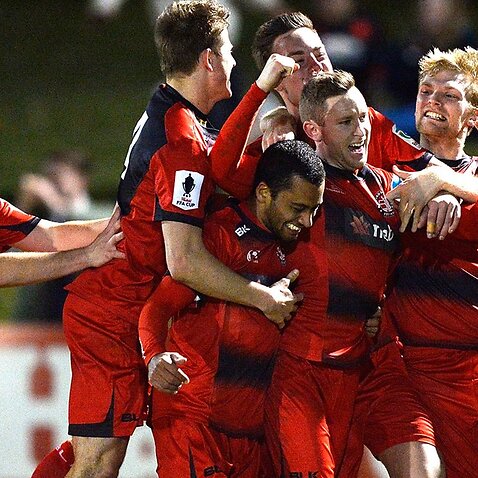 I can understand why Juric, now the club’s goalkeeping coach, feels compelled to point out that team, two decades old.

For the first time in 12 years, the Knights are back in the big time, and it’s got everyone contemplating the past and future simultaneously.

Usually playing in front of crowds of a few hundred, the Knights have just beaten Western Australian side Cockburn City 2-1 in front of several thousands.

The FFA Cup has become a lightning rod of excitement outside the A-League. It’s tapping into a deep, rich vein of the game that never died. It was just dormant for a decade.

The draw for the next round is happening in Sydney, so all the players are huddled around someone’s iPad for the live stream.

Here in the @MelbKnights dressing room, everyone is hanging out for the #FFACup draw after the 2-1 win over Cockburn pic.twitter.com/UcNatwlEbh

“[Melbourne] Victory, come on, we want Victory,” one of the players yells. Near naked, his call is endorsed by all as the balls start to come out of the bowl.

Right now, the magic of the cup is much more than cliche or a hashtag.

Juric and Knights coach Andrew Marth want the Victory, too. We can take them.

More balls get pulled out. It might actually be the Victory - until the next ball kills that dream.

Giant-killing Green Gully it is, and a local derby will have to suffice until the next round.

By now, the Croatian Social Club, which forms part of the greater Somers Street complex, is busting to capacity.

I lose count of the number of times I hear people catching up for the first time since the club exited the National Soccer League.

It seems anyone who is anyone is back here. Truly, it’s an unofficial reunion.

The great Socceroos forward Billy Vojtek, a Knights Team of the Century member, is swapping stories with David Davutovic, now of the Herald Sun.

Davutovic is clutching a swathe of the old match day programs he used to edit as a teenager.

Tonci Prusac, the old media manager and dedicated community figure (now fitness entrepenuer), has made the trip up from Geelong with his kids.

John Sigur, the team manager in the 1994-1995, and whose father helped secure the land on which the team is now based, has flown down from Sydney just for the occasion. He can’t walk more than two metres without being accosted.

Ange Cimera - an iconic figure in Victorian football and the Knights’ honorary chairman - is suffering from mixed emotions.

The social club (which he runs) and the football club are separate entities, though no more than 50 metres apart (and if you’re wondering what happened to the old Batcave bar, it’s now a gym).

"This is great, it’s a fantastic night. It’s fantastic to see everyone come back to the club again," he said, beaming. 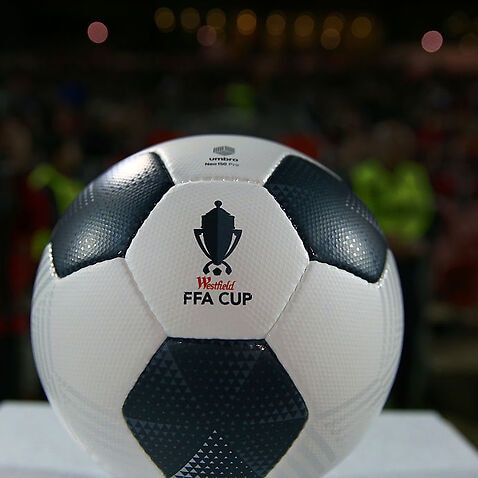 "But it’s hard, mate. We want more nights like this but we’ve got this artificial ceiling in the NPL. We’re not allowed to aspire to be any better than that and for a lot of people, if there’s no chance at getting into a higher league, what’s the point?"

I ask Cimera what his turnover is compared to usual. On a night like this, the potential of the club - football and social - is all around him.

"We’ll probably make tonight about four or five times as much as we would make in an NPL game," he said. His mind starts ticking again.

For some, especially those who haven’t come back in so long, it’s a beautiful evening and a chance to reminisce.

And they do, long into the night. Songs in the mother tongue are belted out at full steam, fuelled by an endless supply of Karlovačko; only bettered as Croatia’s finest export by Luka Modric and Davor Suker.

There's a flare in the beer garden - I know because it explodes right next to my foot. The place is smoked out and while nobody cares too much, Cimera - who is left to open all the shutters - mutters something about them "never learning".

Flares in the Somers St beer garden. Ange Cimera furious but the party rolls on & chants only get louder #FFACup pic.twitter.com/z7YVrPNGNU

Honestly, the moment is more nostalgic than threatening.

Players from both clubs have came in for the post-match meal, and the Cockburn players, used to the Western Australian heat, just seem happy to be out of the cold. It was pelting down during the match.

It’s getting towards midnight when I decide to go, but not before about countless handshakes. Cimera makes me promise I’ll return soon.

You certainly don’t get this in the A-League. The cup’s magic is real. 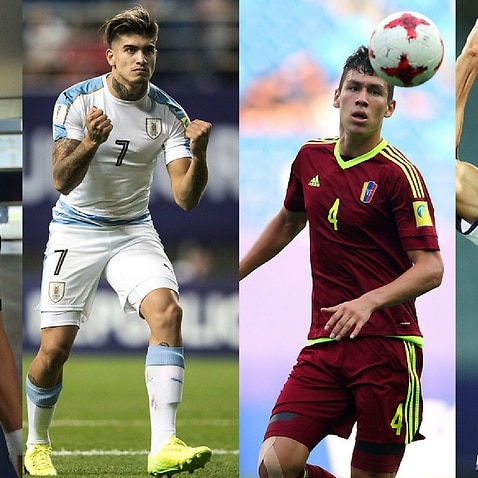