Tony Gustavsson - acclaimed as the brains behind back-to-back FIFA Women’s World Cup wins by the USWNT- is expected to be confirmed today as the new Matildas coach.

The 47-year-old Swede has pipped Perth-based former Italy and Canada coach Carolina Morace, and will lead Australia into four major competitions - including the 2023 World Cup on home soil.

As revealed by The World Game over the weekend, Gustavsson was locked in a joust with Morace for the job, with the core of the Matildas playing group favouring his appointment. 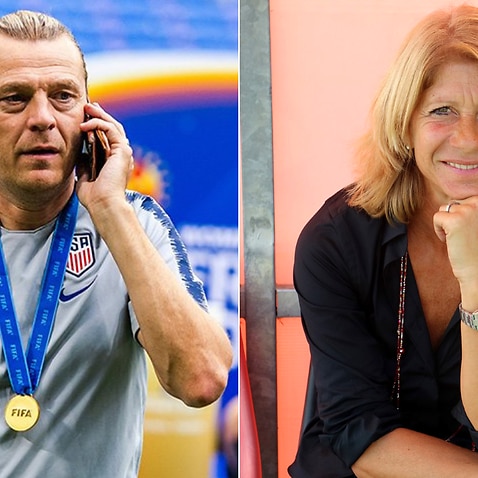 He attracted attention for his “man bun” in France last year working alongside USWNT head coach Jill Ellis, who was the FFA’s original top target to fill the void left by Ante Milicic’s exit.

But it was his tactical and technical acumen, and broad international know-how, which were of greater interest to the FFA, and what convinced them to bring him on board.

Gustavsson’s four-year tenure will take in the upcoming Olympic Games in Tokyo, the 2022 AFC Women’s Asian Cup, the Trans-Tasman World Cup and Paris Games after that.

He spent five years working alongside Ellis - tasting World Cup triumphs in 2016 and 2019 - and has been head coach of Hammarby, Degerfors and Kongsvinger in his native Sweden.

In 2012, he worked under fellow Swede Pia Sundhage with the USWNT, helping them take gold at the London Olympics.

He returned to take charge of Tyreso women’s team in his homeland - guiding them to the 2014 UEFA Champions League final before the club went bust soon afterwards.

He was in line for the USA job alongside Ellis, and when she was appointed ahead of him, her first order of business was to enlist Gustavsson as her second in command.

Speaking after the 2-1 semi-final win over England in France, USA midfielder Rose Lavelle gave an insight of what Australia can expect to see from Gustavsson.

“Tony is amazing. I feel like I'm learning things from him all the time,” she said.

“Having been in the national team for the past three years and having him as a coach has meant that I have developed so much.

“He looks at football in a special way and it is impressive. The things he teaches are just, wow.

"It is very useful to have a different perspective because sometimes you see things in your own way and then he comes and has a different way of looking at it.”

Gustavsson may get the chance to acquaint himself with his new charges - the vast majority of whom are based in Europe - in November, if the FFA are able to secure a Matildas training camp in London.