Still raking it in at the age of 36 at Vissel Kobe in Japan’s J1 League, the midfield genius hasn’t forsaken his roots and his generosity as the Segunda Division club's key shareholder saved them from financial ruin seven years ago after authorities threatened relegation to the bottom rung of Spanish football over $500,000-plus in unpaid wages.

Iniesta has since ploughed more cash into building a modern training base at the club he once called home as a junior before his journey on to to Barcelona and a career which brought nine La Liga titles, four UEFA Champions League crowns, two European Championships and a FIFA World Cup winners’ medal.

“He was only here as a junior for a few years but he’s from the region originally and has never forgotten what the club means to him.

“It’s his club - he has great relationships here and has helped so much financially.

“The facilities and installations and the quality of the coaching is incredible.

“To be honest, it’s a fantastic club. And they’re quite blessed to have this link with a legend like Iniesta.” Cannavaro: Everyone had eyes on Messi, but I was watching Iniesta

Alonso, who has just turned 17, was a part of the Valencia youth system and came close to selection for Trevor Morgan’s Joeys at last year’s FIFA U-17 World Cup in Brazil before just missing the cut.

A native Spanish speaker through his parents, Sydney-born Alonso has been in Spain since the age of 12 chasing his dream in a nation brimming with football talent.

First stop was Primera Division Levante, who immediately farmed Alonso out to feeder club Alboraya, where he proved a prolific scorer and was set to sign a contract with the Granotas on his return before Valencia stepped in.

18 months later, he was approached by Iniesta-backed Albacete, based in the Castil-La Mancha region about an hour’s drive inland from Valencia, where his father Javier owns a restaurant.

“It’s not a big city club like Valencia but they’ve been up and down from the top division and there was the chance to get more minutes and maybe progress faster,” said Alonso.

“Next season I’ll be playing for the U-19s where you face the likes of Valencia, Real Madrid, Villarreal, Levante ... all the big teams.

“Hopefully I can continue through the ranks and get a chance to train with the first team down the track. 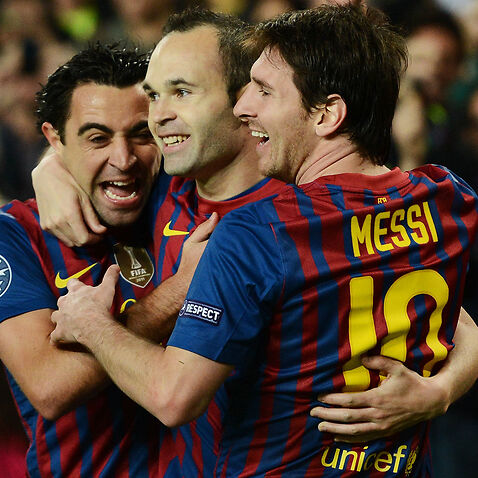 Iniesta: There will never be another Barcelona generation like ours

“I’m still young and have three years to hopefully go to the next level.

“It’s a good place for youth development - and with Iniesta having started here that says a lot.”

Now eligible for the Young Socceroos, the former Joey is determined to keep knocking on the door for his country.

He played a smattering of games at U-17 level and once the new season commences again at youth level in Spain - where it’s been shutdown since March due to the COVID-19 pandemic - he’ll be out to state his case again.

“My last competitive game at club level was back in March but I’ve been training every day since - you have to be fit and ready once the restart come,” added Alonso.

A box to box midfielder in his formative years at the WSW Institute of Sport, and Wanderers after that, he’s transitioned into a winger in Spain, operating off either flank.

In his time with the Joeys, he played as either a number 10 or an eight.

Both pacy and technical, he’s adapted to the challenges of one of the world’s most fraught finishing schools for footballers.

“People think of Spain as these little technical machines running around but the physicality here is incredible as well,” he explained.

“The pace of the game is 10 times quicker than back home in Sydney.

“You have know where you’re going to give the ball before you even receive it, and that guy has to know what he’s going to do.

“It’s instinctive and natural here - every day with the ball from five years and up.

“Since getting here I’m a different player. You have to think fast and you improve by being around gifted players.”