Veteran striker Zlatan Ibrahimovic continues to face the challenges of age and defy the rules of logic by playing a starring role for Italian league leaders AC Milan.

Professional players are usually retired by the age of 39 and some of them might be well into a coaching career, but the prolific Swede has other ideas.

The man who leads Serie A's goalscoring charts with eight goals from seven matches is showing no signs of wear and tear although he admits that the forthcoming two-week international break couldn't have come at a better time for him.

"I need a rest," he said after scoring a last-gasp goal that enabled Milan to share the spoils with Verona in a 2-2 thriller at the weekend.

"I didn't have the sharpness and usual determination I have in front of goal. I just felt like I wasn't all there." 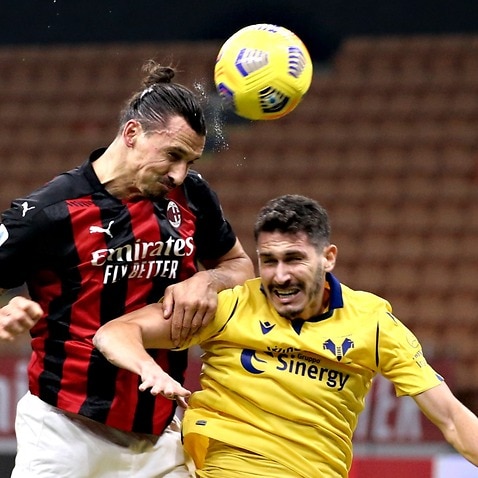 His powerful header that found the back of the net after he missed a penalty prompted Milan's La Gazzetta Dello Sport to hail the Swede's performance with a front page headline that read 'Incredibra'.

Ibrahimovic has transformed the 'Rossoneri' since he joined the club in January.

No wonder Milan fans are once again dreaming of UEFA Champions League football next season.

Ibrahimovic has been scoring goals for fun since he left his first club Malmo for Ajax in 2001.

He scored 74 goals in three seasons with the Dutch giants before he continued to cause mayhem in the penalty areas of Europe and the United States via spells with Juventus, Internazionale, Barcelona, Milan, Paris Saint-Germain, Manchester United, Los Angeles Galaxy and since January Milan again.

He has scored goals of any description, some of which were straight out of the realms of fantasy football.

And he has every right to feel he should be considered as one of the greatest strikers of all time.

Yet the question needs to be asked if it is fair to regard Ibrahimovic as simply an amazing goalscorer and not a magnificent footballer.

Watching him play these days you would notice that although his legs are showing the strain of endless battles with the world's best defenders he remains an excellent target man with a nimbleness that is unusual for a player of his size. Australia's 2006 World Cup captain Mark Viduka springs to mind in this regard.

Ibrahimovic's distribution is of the highest quality and whenever he gets the ball something usually happens because he rarely gives it away.

He sometimes has been criticised over the years for complicating matters with outrageous moves when a simple pass would do.

But that is perhaps the essence of the man and what makes him so unpredictable and dangerous in the box. Doing the simple things must bore him to death and he must always get a special thrill from trying an extravagant manoeuvre and seeing it come off.

He might be a nightmare to his coaches at times but, hey, there is no doubt that each and every one of them would rather have had him on their side than at the other end.