Aussie midfielder James Holland spoke to The World Game about his roller-coaster career and the lessons he has learned whether it be in the AIS, the A-League or the UEFA Champions League.

Holland’s career has been a roller coaster, but the 2019-20 season was certainly on an upward trajectory before it came to a screeching halt.

Holland’s LASK who were on the verge of ending a 55-year drought by winning the Austrian Bundesliga title for the first time since 1965.

Holland was a vital starter in both their domestic and European campaign, where they topped their Europa League group that included Sporting CP and PSV.

The boy from the Central Coast of New South Wales was preparing to play Manchester United at Old Trafford in their Europa League last 16 clash.

Calls for him to be recalled to the Socceroos squad were growing louder.

Then, like almost everywhere in the world, coronavirus hit and everything stopped.

It must have been incredibly frustrating.

“It is what it is, there are definitely worse things in life. I’m certainly not the worst off in the world. I almost laugh at my own situation,” a relaxed Holland says from his home in Austria.

“Life happens. It’s a surreal situation for everyone. Hopefully, when things go back to normal I can hit the ground running and that trajectory will stay on course.”

This zen-like perspective can only come from a lifetime of lessons and contrasting experiences the 30-year-old has had.

From being raised by single-mother on the Central Coast, growing up with Oliver Bozanic and Andrew Redmayne to joining “a professional environment” at the AIS as a 17-year-old.

The merits of the Australian Institute of Sport’s (AIS) football program has been heavily debated this week after Socceroos legend Mark Viduka criticised its closure in an interview with ESPN.

Holland, who attended the program in 2006, shared Viduka’s disappointment, and attributed his time there as some of the most important years of his career.

“I wish I was able to go there at the age of 14 and be there for four years, it was so valuable for my career. It taught me what it was like to be a professional.”

That environment allowed Holland to join the Newcastle Jets in 2007 at 18 and slip straight into the starting XI.

Playing in the heart of midfield, the youngster impressed in a title-winning side, a feat the Jets have yet to repeat since. 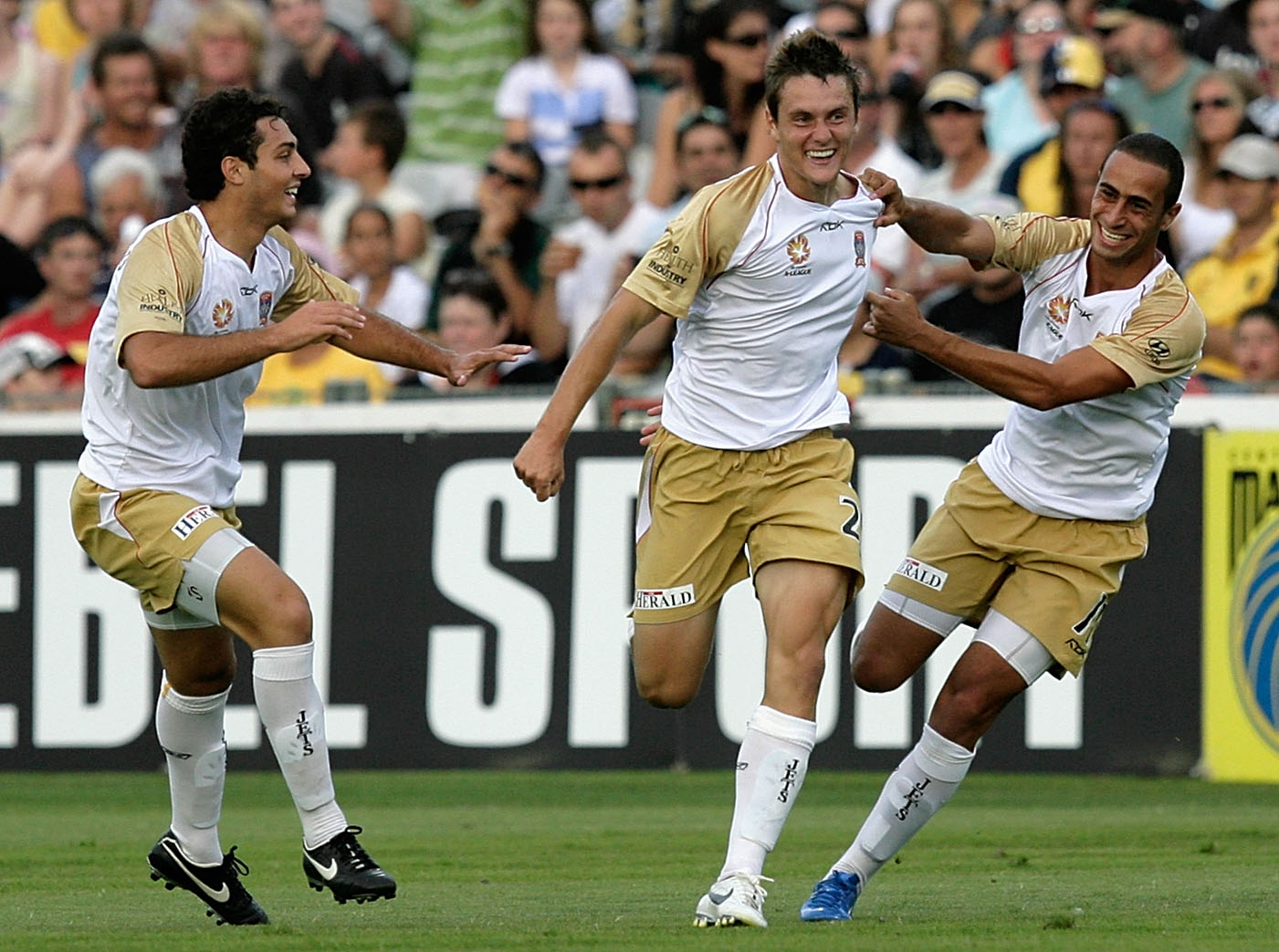 “It was a perfect storm. We had a really good mix of boys. What set us apart was our team spirit and our camaraderie.

“I’ve learnt that in the last couple of years, it is really important from a club perspective to look at the chemistry of your team. Look at the values of your club and bring in players that compliment that.

At 19-years-old Holland’s performances with the Jets had piqued the interest of Eredivisie side AZ Alkmaar who were on course to win the title for just their second time in their history.

Europe was Holland’s dream, but a meeting with an “intense” Louis van Gaal who was AZ’s coach at the time almost turned it into a nightmare.

“I flew home thinking, ‘ok, back to Jets’, and then a few days later they called and offered me a four-and-a-half-year deal. Holland had gone from hero to zero starts as he was up against the likes of Aussie Brett Holman, future Spurs star Mousa Dembele and soon to be Netherlands international Jermaine Lens for a start in midfield. “I was working really hard but I felt like I was on a treadmill. It was kind of like my apprenticeship.

“If you look at the golden generation everyone had that period of an apprenticeship. You get to Europe and you realise how far you are behind as an Australian footballer.”

It’s a common experience for many talented Aussies who make the move over to Europe, but what would advice would Holland give a player going over?

“Be resilient, don’t give up, find your path no matter what. If you do all that you can build a career in Europe.”

“I’m not saying I’ve been unbelievably successful in Europe. But the key ingredient is resilience.”

Holland didn’t give up and in 2012, with the help of former AZ teammate Joey Didulica, he made the move to Austrian powerhouse Austria Wien.

He went from not playing at all to cementing a starting role in midfield, he won the title in his first full season with the club which led to Champions League football and that spine-tingling anthem in 2013.

“For me, it’s the closest thing you can get (in terms of excitement) to the national anthem as a professional footballer.

“You grow up, waking up early, watching the Champions League games on SBS was the only taste of it that I got as a kid. You get goosebumps.

“It was awesome. I wish I realised it at the time. You take it for granted as a youngster.” Holland is a keen learner, whether it’s at the AIS, AZ or even against Atletico Madrid in the UCL.

Atletico Madrid won the La Liga title that season as well as go all the way to the final that season.

But Austria Wien hardly disgraced themselves against the La Liga giants, Porto and Zenit St. Petersburg, finishing just one point off second place and a round of 16 spot.

Holland wanted to challenge himself and decided to leave Austria but, “instead of landing on my feet, I landed flat on my face. It was another lesson.”

He ended up back in Australia with Adelaide United working under Barcelona legend Guillermo Amor.

“He (Amor) was still the best footballer there whenever he got involved in training, he was brilliant.”

Despite making plenty of friends at Adelaide, Holland was only in Australia for a short time, yearning for a move back overseas.

“It was an unbelievable experience away from football. It was mind-blowing from a cultural perspective.

“They have very different cultural values and ways of living. I went there with an open mind and I loved it. I did my best to embrace it and I had Robbie Kruse there who is a good mate of mine, so we just tried to experience it to the fullest.”

The open mind certainly came in handy when he and Kruse were in a five-star restaurant and a man who was sweating on another table took his shirt off mid-meal and carried on eating as normal.

“The boys wouldn’t want to shower after games. They use to just get changed and get back on the bus. Everyone would be stinking and then they just start spitting on the floor of the bus. Krusey and I were just looking at each other like ‘What is going on here?’

“But for them, it’s normal so we didn’t judge or abuse them for it. You just have to get used to it.”

The riches of Chinese football aren’t always what people think and unpaid wages saw both Holland and Kruse terminate their contracts.

Holland made the move back to Austria to join recently promoted LASK in 2017 and it proved a brilliant move.

They finished fourth in 2018, second in 2019 and then they were on track to win the league this season, three points clear of Red Bull Salzburg heading into the Championship round.

This season has seen Holland not only score against major rivals Red Bull Salzburg, but utilise a new skill that has seen the team reap the benefits; throw-ins.

“The assistant coach who came in this season said there is a lot of value to add with the long throw, so I kind of fell into that role.

“We’ve done really well it, because it’s not easy to defend. It’s not easy to get the power on it (as a defender) so it’s all about the second ball.”

When defending a corner, the ball is often rocketed into the box so a defender can use that force to head it away from danger. With a throw in the ball enters the box with significantly less force, so a defender struggles to get the power on the ball to clear the danger.

LASK beat RB Salzburg 3-2 away from home (surpassing them at at the top of the league) and then drew 1-1 away to AZ in the Europa League, having scored all four goals from throw-ins but I'm supposed to think they don't matter because your old English pundit of choice said so 😂 pic.twitter.com/lTdzFt7WcJ

“Our boys have done really well converting the opportunities and it’s impacted big games for us.”

Their three goals against Red Bull in a 3-2 win came off throw-ins, including one that Holland scored from, as did their crucial away goal against his former side AZ in the Europa League.

Such is the potential for throw-ins to lead to goals, teams like Liverpool have brought in specialist throw-in coaches.

“I think throw-ins are very under-appreciated and under-utilized. You have more throw-ins than any other set-piece. So we focus a lot on throw-ins. On quick throw-ins also as it helps keep our up-tempo pace and style of play.

But it’s not just smart set-pieces that have made LASK the league leaders.

“The club has done a really good job bringing in players that suit that. And, as with the Jets, the key to our success is that team spirit.

Can Australian football learn from the success of LASK and their gegenpress style of football?

“110%. It’s all about physical attributes and teamwork. Australian footballers are generally physically good and hard working.

“The comradery that you get when playing for the Socceroos is special, and that’s what this philosophy is built on.

“Sometimes it compensates a difference in quality (technical ability). I can tell you from my own personal experience, I’m not the most technically gifted player. But from hard work and being able to read the game better that helps compensate some deficiencies I have.

“It’s a big thing that Ange (Postecoglou) use to preach. Put them on the back foot, as soon as they pass backwards, we’ve won and we take a step forwards and we never take a step backwards.

The 19-year-old who wasn’t “tactically good enough” for AZ returned as a 30-year-old with LASK and knocked them out of the Europa League.

Holland has learned lessons at the AIS, in the A-League, at AZ with van Gaal, with Ange Postecoglou, with Austria Wien and LASK in Austria.

You get the sense that whatever happens and wherever he goes he’ll keep learning, and that’s a lesson for us all.