Cristiano Ronaldo is 'exceptional' but Spain's new coach Fernando Hierro would not trade the Portugal captain for any of his squad.

Ronaldo's stunning late free-kick completed his first FIFA World Cup hat-trick, earning a 3-3 draw for the EURO 2016 winners in the Group B clash in Sochi.

The Real Madrid superstar struck with all three of Portugal's shots on target at Fisht Stadium, rocking a Spain side who dominated possession despite falling behind twice.

Hierro was taking charge of Spain for the first time after he was installed as the replacement for Julen Lopetegui, who was sacked on the eve of the FIFA World Cup after agreeing to take over at Madrid beginning in 2018-2019. 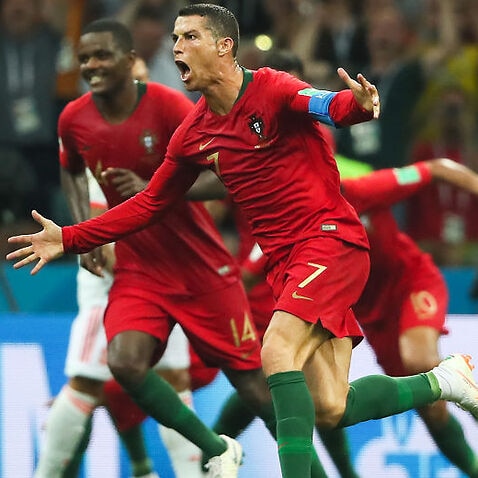 "When playing against a player like Ronaldo, these things can happen," Hierro told reporters. "We could have seen a 4-2, because we had opportunities and the team was confident.

"There was just that one moment, that small detail, and when a team has Cristiano Ronaldo, it's very fortunate for them.

"I have a really good relationship with Ronaldo, he is exceptional, but I wouldn't change him for any of my players in my Spain squad."

David de Gea was badly at fault for Ronaldo's second, fumbling in a 20-yard drive that was straight at him, but Hierro would not single out the goalkeeper and instead focused on the positive display from two-goal striker Diego Costa.

"We are a team. We have good days, better days and poor days. But we are a family," Hierro added. "Diego Costa has played a sensational match tonight, but we stay together, we don't leave anybody behind.

"We're not going to point the finger of blame at anyone or criticise anyone. Of course there are important moments but we must be seen as a team. Every single player is extremely important, from number one to 23. We're all the same family."

Lopetegui's dismissal two days before Spain faced Portugal shocked the football world and left Hierro to step in from his role as director of football, but he would not be drawn on the unusual circumstances of his appointment.

"I never speak to any coaches about what they have in their heads," Hierro said. "Many of Julen's staff have stayed and there was a plan in place, so of course we would stick to it. We didn't want to tweak or touch anything.

"I really do want to thank all of the staff. Extremely professional people, and we've all had to adapt to the circumstances. We all have our personal touch and they have adapted very well, this situation wasn't easy.

"We feel very proud of the players, after the adversity of the match itself. We've come back and equalised, twice, so we feel great pride. This is a mature squad. There are no doubts, the team knows what it wants.