If you run a European football club, there’s plenty of threats to worry about.

You have opposition players and coaches trying to beat you.

You have teams, both foreign and domestic, trying to buy your best players - or worse, sign them on a free transfer.

You have fans who demand success, you have the media who will publicise any failures they find.

You have to deal with agents, parents, partners, sponsors and owners - it’s a lot to take on.

But the biggest threat to many European clubs for the past five years has been a baby-faced history graduate with a laptop. 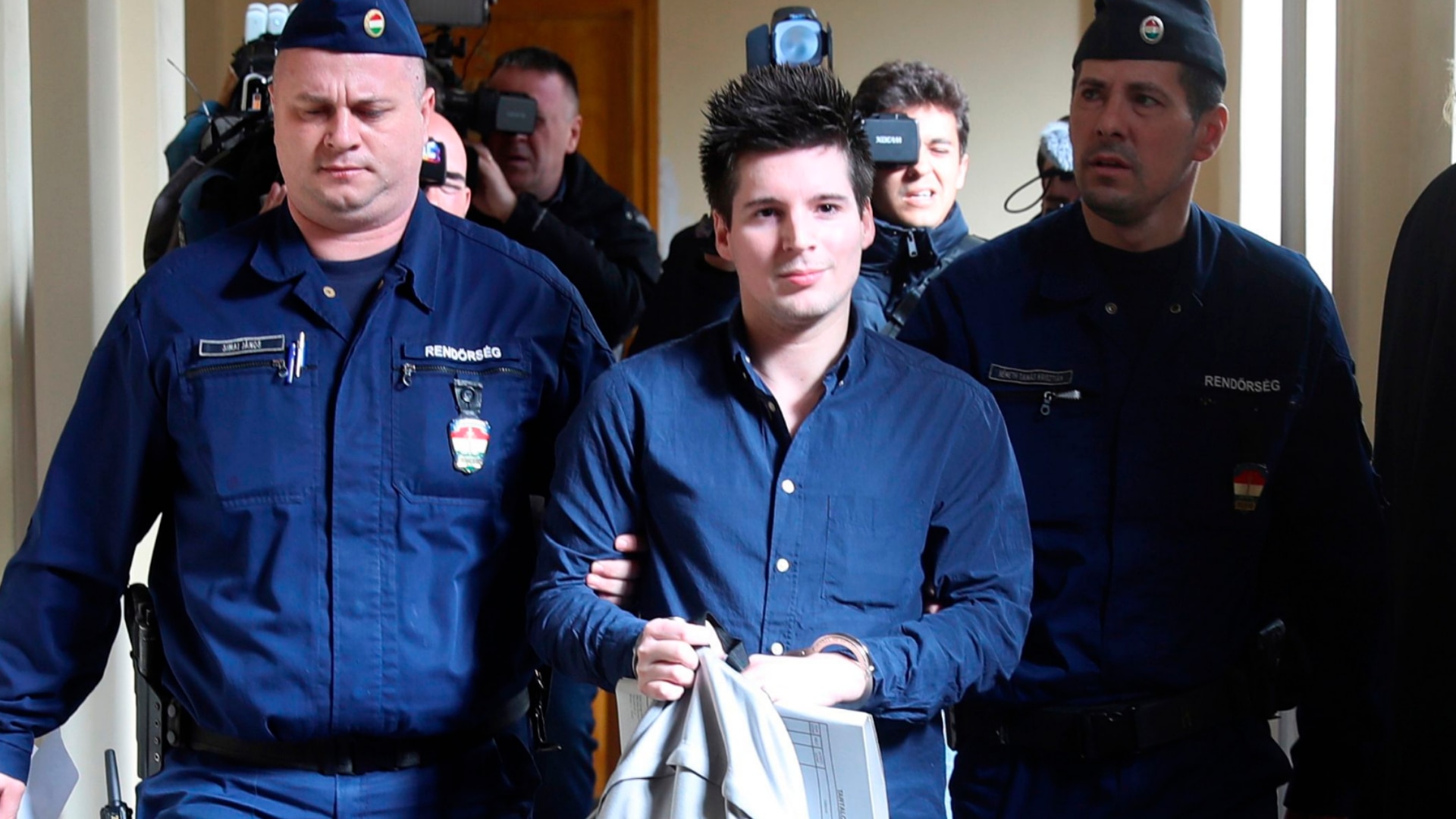 Rui Pinto after his arrest in 2019.
Getty Images

Growing up, Pinto was obsessed with football.

“Every time I was watching a Portuguese match, I was taking notes. I would draw the team’s jersey, write down the starting XIs, the results, the goalscorers, everything," he said.

Pinto was 16-years-old when his local side FC Porto won the UEFA Champions League in 2004.

While his football obsession continued from childhood into his early 20s, at some stage he became interested in computers and, despite no formal I.T training, managed to teach himself about ‘hacking’.

In September 2015, Pinto set up the website Football Leaks.

“Welcome to Football Leaks,” it read in Portuguese. “This project aims to show the hidden side of football. Unfortunately, the sport we love so much is rotten and it is time to say ‘enough'.”

The website posted a trove of player and coach contracts which showed exactly how much people were earning and, in many cases, the involvement of third-party owners - a practice which FIFA had banned.

Atletico Madrid, Porto, Benfica, Sporting, Monaco, Marseille, Sevilla, Valencia and FC Twente were just some of the clubs implicated in these initial documents.

By December 2015, Dutch side Twente were given a three-year European ban and fined nearly $300,000 after Football Leaks revealed the club had third-party ownership agreements with player agency Doyen Sports. Two years later, the 2010 Eredivisie champions were relegated.

The fallout continued despite no one knowing who was behind the website. Some thought Russian hackers, others claimed a disgruntled former sports lawyer.

In early 2016, Football Leaks published the contract to Cristiano Ronaldo’s image rights. This would lead to Ronaldo receiving a two-year suspended jail sentence and a $28 million fine from the Spanish government for tax evasion.

By this time Pinto, now 27, had moved to Hungary where he had studied on exchange while at university.

It was there he met German journalist Rafael Buschmann who worked for Der Spiegel, one of the most respected outlets in the world.

Buschmann would wade through those documents and use the information to bring some of football’s darkest secrets to light.

It was revealed that Lionel Messi earns more than $166 million per year and that Real Madrid had tried to buy him in 2013.

It was revealed that Sergio Ramos had tested positive for a substance banned by the World Anti-Doping Agency (WADA) after giving a sample following Real Madrid’s 4-1 victory over Juventus in the 2017 Champions League final.

It was revealed that Paris Saint-Germain racially profiled young players and were forced to pay a fine of over $166,000.

It was revealed that Manchester City and PSG were both cheating financial fair play regulations. This led to City being banned from European competition for two seasons and fined $50 million.

Hundreds of players, agents and clubs were caught up in each release of documents.

One of the most serious allegations came in April 2017.

Football Leaks uncovered an email that showed Cristiano Ronaldo had paid an American woman $375,000 to drop all charges in relation to an alleged rape that had occurred in 2009.

In September 2018, Der Spiegel used that document to track down the accuser Kathryn Mayorga.

Ronaldo denied the charges and disputed the report but Las Vegas police reopened the investigation. After two years the investigation was concluded and Ronaldo would not be charged as the crime “cannot be proven beyond a reasonable doubt.”

Pinto’s revelations caused huge problems for Ronaldo. But despite that, Pinto claims he is still a fan of the Portuguese superstar.

“I’m a big fan of Cristiano Ronaldo. He’s my favourite football player. I think he’s the most complete player of all-time… but this never prevented me from publishing information or data that is relevant. I don’t have any hidden agenda,” Pinto told journalists in 2019.

So what was his agenda? His motivation?

“Modern football - this business, made me sad," he said.

“I didn’t target a specific club or a specific country. If I have data from a club, why shouldn’t I share it with the media? I shared everything I had.”

On 16 January 2019, Pinto was arrested by Hungarian police on the street as he returned from the supermarket with his father.

The arrest was at the request of the Portuguese police who charged him with suspicion of attempted qualified extortion, violation of secrecy and illegally accessing information.

Some hail Pinto as a hero. Dortmund fans held up a banner against Tottenham that read “Fight for transparency! Free Rui Pinto! FIFA, UEFA mafia.” 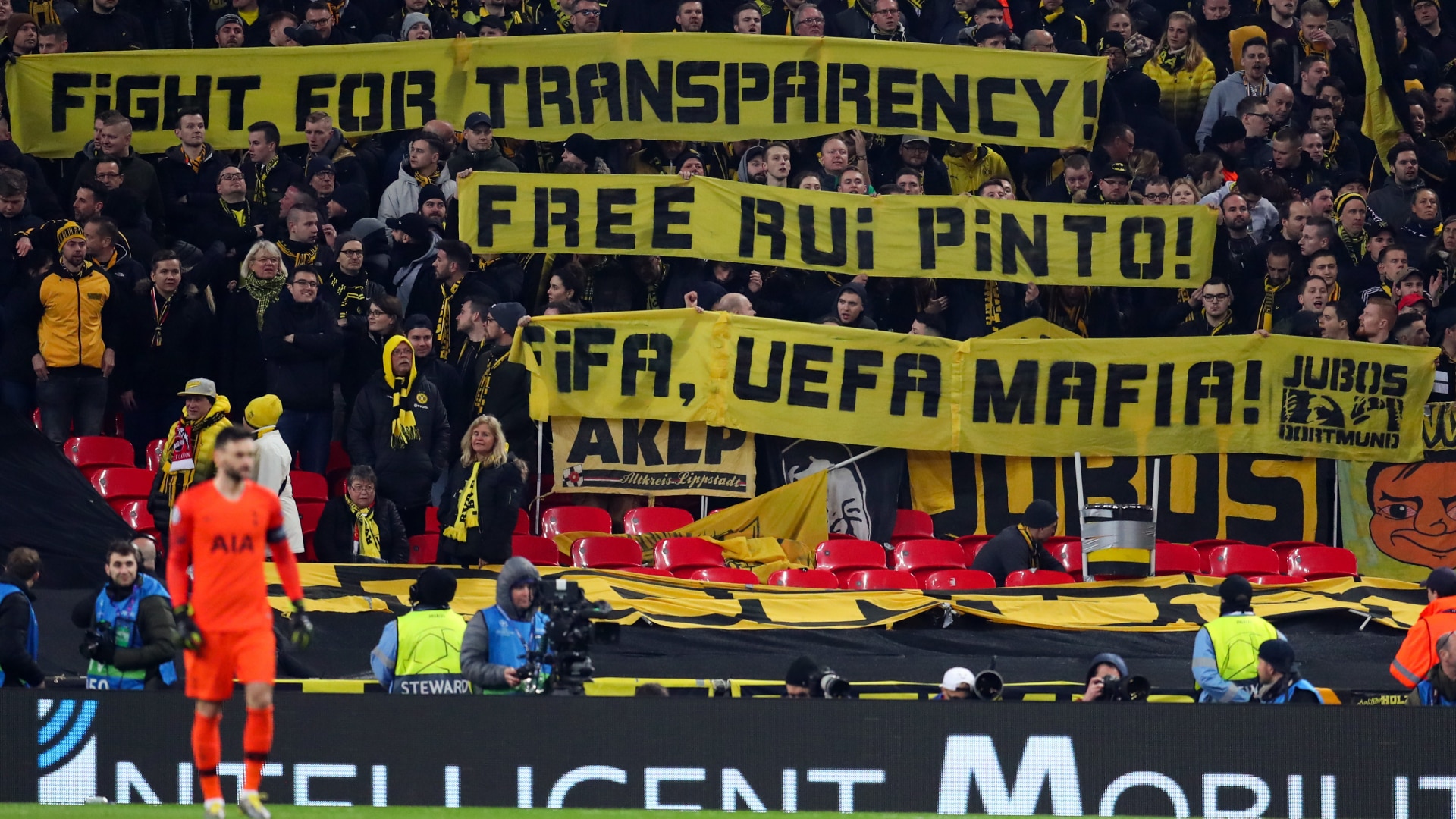 Fans of Freiburg and Augsburg did similar, but in Portugal, many fans of Benfica were furious.

Another email discussed a group of eight referees who could be relied on to favour Benfica at decisive moments.

A PowerPoint presentation showed the club’s intention to increase the club’s influence over journalists, politicians and judges.

Benfica were embarrassed. Their president was now under investigation. Their fans sent Pinto death threats after he was revealed to be the ringleader behind the documents.

Pinto has now been extradited to Portugal where he faces up to 25 years jail.

“There are mixed feelings about Rui Pinto in Portugal. Being related to the ‘Benfica emails case’, most Benfica supporters see him as a criminal. Their opponents, the opposite, like a hero,” respected Portuguese journalist Luís Pedro Ferreira told The World Game.

The judge who was supposed to preside over Pinto’s case, Paulo Registo, has already recused himself after it was revealed that he was a Benfica fan and had ‘liked’ a post comparing Pinto to a pirate.

Pinto currently sits in house arrest, without access to a computer, where he awaits trial.

There is hope for Pinto that he might avoid jail time if the government accepts a collaboration where Pinto provides information regarding a number of open investigations. However, it is yet to be determined.

It has been an incredible journey for Pinto, who went from drawing football kits as he watched matches to one of the most infamous figures in European football.

For all the illegal and immoral behaviour that Pinto revealed, it is he who is facing the greatest punishment.

“My father was always saying ‘don’t be such a fanatic, because it will ruin your life'."