Eden Hazard marked his 100th international appearance with a goal as he helped Belgium to a comfortable 2-0 victory over Cyprus in Nicosia to extend their winning start to EURO 2020 qualifying.

Much of the build-up focused on Chelsea star Eden Hazard due to the significance of becoming only the third Belgian to reach a century of caps and he did not disappoint, leading the way as Belgium added to last week's 3-1 win over Russia.

Eden Hazard gave the visitors an early lead with a typically tidy finish for his 30th in a Belgium shirt and Michy Batshuayi doubled the advantage eight minutes later.

The visitors never looked in danger of relinquishing their lead as Roberto Martinez's men secured an early three-point cushion at the top of Group I.

Belgium were kept at bay for just 10 minutes as the ball broke kindly for Eden Hazard just inside the box and he curled a fine effort inside the right-hand post.

Thorgan Hazard then played a key role as Belgium got a second soon after, chipping a clever pass over the defence for Batshuayi and he found the net after skipping past the goalkeeper.

Martinez's side seemed to play within themselves thereafter, failing to offer much urgency or killer instinct in the final third.

Timothy Castagne and Youri Tielemans both put harmless efforts wide of the left-hand post in the first 10 minutes of the second half, while Batshuayi was denied by an excellent last-ditch Anthony Georgiou tackle when seemingly through on goal with a quarter of the match to play.

Cyprus – 5-0 winners over San Marino in their opener – nearly pulled one back two minutes from time, but Kostas Laifis headed on to the roof of the net and that was the final opportunity. 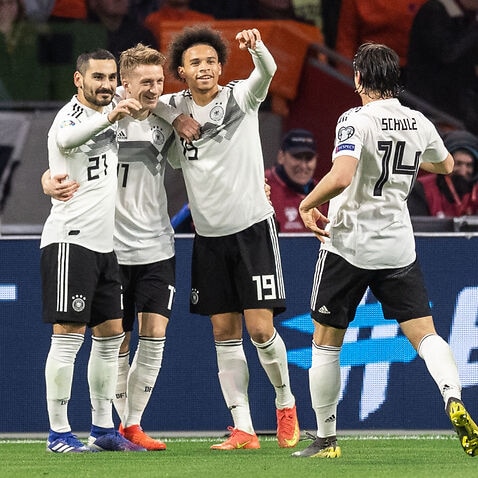 What does it mean? Belgium a cut above everyone in Group I

Two games down and Belgium already look as though they are going cruise in Group I. A comfortable victory against Russia last time out, followed by a stroll in Cyprus, with Kazakhstan, Scotland and San Marino making up the rest of the pool – qualification seems a certainty.

Looking at the rest of their scheduled opposition in San Marino, Scotland and Kazakhstan, one can surely expect Belgium to qualify with maximum points.

Not only did he get himself a goal, Batshuayi also led the line to good effect, dropping deep and moving out wide when he had to, while he also linked well with his fellow attackers. Only stubborn defending denied him a second goal.

Dries Mertens was without doubt the quietest of Belgium's attacking unit, having precious little impact in the first half. He was unsurprisingly withdrawn just before the hour.

The next set of qualifiers are in June, when Belgium will host Kazakhstan and Cyprus travel to Scotland.