Eden Hazard impressed as Real Madrid swept aside Eibar 3-1 in the Spanish capital on Sunday.

Toni Kroos, Sergio Ramos and Marcelo eased Madrid into a comfortable half-time lead, with the visitors' second-half improvement yielding nothing but a Pedro Bigas consolation.

With Barcelona having won 4-0 at Real Mallorca a day earlier, the pressure was on Los Blancos to follow suit and close the gap at the top of the table back to two points.

Madrid's home games are being held at the Castilla's Alfredo Di Stefano Stadium while the Santiago Bernabeu undergoes renovation work, but the change in venue made little difference as the home side marked Zinedine Zidane's 200th game in charge in winning fashion.

Kroos broke the deadlock in the fourth minute with a sublime first-time strike from just inside the box that looped beyond goalkeeper Marko Dmitrovic.

Eibar responded well but were 2-0 down after half an hour. Ramos stepped out to intercept a pass and spark a swift counter-attacking move that ended with the Madrid captain tapping in an unselfish square ball from the impressive Eden Hazard, who was back in the line-up for the first time since February after recovering from an ankle fracture.

A crisp strike from Marcelo into the bottom-right corner after more good interplay between Hazard and Karim Benzema made it 3-0 before the break, the Brazil left-back taking a knee after drilling home his first league goal of the season.

Veteran Madrid defender Marcelo 'took a knee' after his goal on 37 minutes, in apparent support for the Black Lives Matter movement.

Thibaut Courtois saved superbly from Edu Exposito and Sergi Enrich hit the bar with a header, before Pablo De Blasis' shot deflected off Bigas and bobbled beyond Courtois to give Eibar a lifeline.

It was a largely pedestrian second half from Madrid, with Hazard and Ramos taken off and Marcelo struggling with a knock, but Eibar could not mount a comeback. 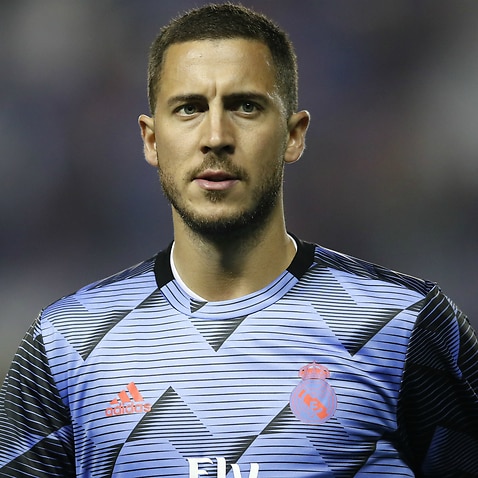 Hazard 'trying not to eat a lot of buns' during lockdown

What does it mean? Title race shows few signs of fizzling out

Resounding wins apiece for Barca and Madrid mean the gap at the top is only two points with 10 games to go and neither side is looking especially rusty after the long break.

This was certainly a display to show Zidane's men will not give up the chase without a fight and will also serve as a useful reminder to Manchester City before the Champions League last-16 returns.

Eibar are just two points above the bottom three, having won just once in eight league matches.

Hazard and Benzema in harmony

Injury has ruined much of Hazard's first season in LaLiga, but this display was a sign that he plans to make the most of the coming few weeks.

His link play with Benzema was excellent, particularly in the first half, and should have given Zidane plenty of encouragement.

Who is left for the right?

Rodrygo started the match, Gareth Bale and Vinicius Junior came on, Isco, James Rodriguez and Marco Asensio stayed on the bench, and we are still unclear who is Madrid's best option on the right wing.

That kind of depth will prove useful in the hectic schedule to come but settling on a first-choice front three would help bring balance to a Madrid attack that has often struggled this season.

- Zinedine Zidane is the third Real Madrid boss to reach 200 games in all competitions (W132 D42 L26), after Miguel Munoz (605) and Vicente del Bosque (246).
- Madrid had fewer shots than in any other LaLiga game this season (6 in total, 5 on target), but they had their highest shot conversion rate (50 per cent).
- Toni Kroos has scored six goals in all competitions this season - his best tally in a single campaign for Los Blancos.
- Eibar boss Jose Luis Mendilibar is winless in his 11 away games at Real Madrid in LaLiga (D1 L10), with his teams conceding 40 goals (3.6 on average).
- Only against Barcelona (41) have Eibar conceded more LaLiga goals than when they have faced Real Madrid (32), while they have only scored eight goals against them.