Joe Hart endured a nightmare Torino debut as his error set Atalanta on the way to a 2-1 victory at Stadio Atleti Azzurri d'Italia.

The Manchester City loanee became the first English goalkeeper to appear in Serie A when he replaced former Liverpool man Daniele Padelli in the visitors' line-up but his bow ended in disappointment as he dropped a set-piece to allow the hosts to equalise.

Hart joined the Italian club last month after new City boss Pep Guardiola opted to sign Claudio Bravo and, although the Chile international was then culpable for a goal in the Manchester derby, his mistake was echoed here by his predecessor at the Etihad Stadium.

Sinisa Mihajlovic on Joe Hart: "There were individual errors. The fewer you make, the more chance you have to win." pic.twitter.com/3wqBpt40SF

The England international did, however, record a passing success rate of over 80 per cent - topping Bravo's 70.5 per cent effort - having been criticised for his distribution in Manchester.

Hart was called into action for the first time in the 20th minute, parrying well from Franck Kessie's angled strike before an Atalanta forward inadvertently blocked the rebound.

A routine stop followed as Torino were increasingly put under pressure, and, while he was redundant as the hosts squandered a number of fine chances at close range, a couple of instances of miscommunication led to nervy moments.

Joe Hart completed 17 passes (83%) on his Torino debut; more than he's managed in ANY league game since 2010/11. pic.twitter.com/VQW6wLmDVA

However, the response was instant. If the home goalkeeper had little chance with the opener, Hart's error was obvious as he spilled a corner at the feet of Andrea Masiello, who ruthlessly converted.

The 29-year-old was handed an opportunity to redeem himself with eight minutes remaining when Atalanta won a penalty, but Kessie sent him the wrong way from the spot.

Frank de Boer secured a first competitive victory as Inter Milan boss at the third time of asking, with captain Mauro Icardi firing a late brace in a 2-1 win over Pescara.

De Boer lost his opening game in charge to Chievo before fighting back to earn a point against Palermo, and Jean-Christophe Bahebeck's fine volley threatened to hand Inter another setback here.

But Icardi headed an equaliser to save De Boer's blushes and then ended the side's run of four away league defeats with victory as the striker grabbed his second in stoppage-time.

Pescara have enjoyed an action-packed return to Serie A, drawing with Napoli and then being awarded a win at Sassuolo as their hosts fielded an ineligible player.

But this was a dreary affair by comparison, although the hosts had enough opportunities to win it and struck the crossbar through Valerio Verre.

A serious-looking injury to Luca Antonelli marred a difficult game for AC Milan as they were beaten 1-0 by Udinese.

Stipe Perica struck in the 88th minute to snatch all three points for the visitors and end a run of nine away games against Milan without a win.

Vincenzo Montella's side were looking to bounce back from a 4-2 loss to Napoli last month, but were unable to test Orestis Karnezis in the Udinese goal sufficiently despite dominating possession at a stifling San Siro.

A disappointing result was marred by a worrying moment involving Antonelli, who was carried off after lengthy treatment on the pitch after he took a hit at a corner.

Jose Sosa came closest for Milan, striking the crossbar from 18 yards, but they struggled to fashion service for Carlos Bacca against a disciplined visiting defence.

Milan pushed to the end, but were hit with a sucker-punch on the break when Perica turned in a cross from Emmanuel Badu meaning Udinese leapfrog Montella's side in the Serie A table and sit on six points from three games.

Meanwhile, heavy rain in Italy led to Fiorentina's match at Genoa being abandoned.

With the score 0-0 after 28 minutes, the worsening weather made conditions impossible and the referee called a halt to the match.

There was no improvement and standing water on the pitch meant the decision was taken to abandon the game. 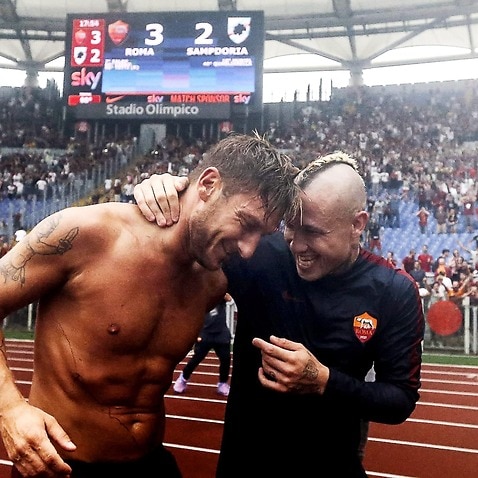