Erling Haaland's attitude towards matches and training has delighted Lucien Favre since the striker joined Borussia Dortmund, but his coach wants him to understand the necessity of an occasional rest.

Haaland has only started three of Dortmund's five Bundesliga matches since the season resumed last month, with the Norwegian suffering a minor knee injury at the end of May.

His performance against Schalke aside, the 19-year-old's displays have not been as explosive as they had been prior to the coronavirus-enforced break, but without him in the team Dortmund have appeared significantly short in attack.

It has proven a challenge for Dortmund to balance the need to keep him fresh while also maximising their attacking output - Haaland's late winner in the 1-0 victory over Fortuna Dusseldorf at the weekend coming after he came on as a substitute. 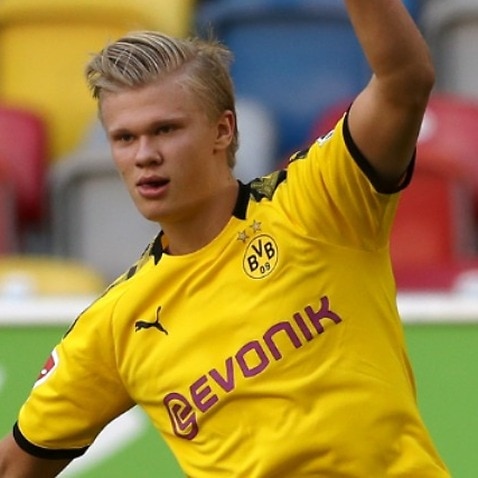 But Favre is well aware of the potential pitfalls of over-burdening Haaland, even if the teenager is not, and he acknowledged another striker will have to be brought in for next season in order to prevent the former Salzburg star suffering from burnout.

"I think everybody knows that," Favre said, when asked if he needs another centre-forward as back-up next term.

"I think that's clear too, because he's only 19 years old.

"It is normal that he is sometimes tired when you have an English week [a weekend fixture following by one in midweek], because he can't do everything on his own.

"We have also noticed that he is still growing. He was injured two or three times recently since he came to us. So, we have to dose what he does, because otherwise it could be dangerous.

"He has to understand this, because sometimes it is not possible to play three games in one week. Many players have problems with that.

"You can get injured or you're just not fresh and it's important that he has the freshness, but normally Erling plays because we need him.

"I like his mentality, he always wants to be there and always win, but of course he also has to make his progress, he is only 19 and has so much potential.

"But he likes to train, he still wants to do special exercises after training and I like that. I really enjoy doing that with him, but he has to understand that it is important to dose the whole thing."

Dortmund return to action at home to Mainz on Thursday (AEST), knowing a turnaround in the title race will already be beyond them if Bayern Munich beat Werder Bremen on Wednesday to clinch an eighth successive Bundesliga crown.