Robin Gosens was the catalyst for a remarkable turnaround as Joachim Low was belatedly vindicated and Germany blew Group F wide open.

Few coaches have received quite as much scrutiny as Low in the elongated run-up to Euro 2020.

Castigated after Germany's stunning group-stage exit at the 2018 FIFA World Cup, Low kept his job on the proviso of him starting a new phase for Die Mannschaft, with many of the old guard who helped inspire them to glory four years earlier in Brazil cast aside and their next generation of stars pushed to the fore.

Transitions, though, are rarely straightforward and Germany's bumps on the road to the European Championship were severe. They would have been relegated from League A of the Nations League if not for a restructuring following the inaugural edition and a 6-0 thrashing at the hands of Spain in the same competition last November prompted an inquest that eventually led to his March decision to step down after the Euros. A World Cup qualifying defeat to North Macedonia likely influenced Low's call to end the exiles of Thomas Muller and Mats Hummels for the Euros but, after the latter put through his own net in Germany's 1-0 loss to France in their opening Group F fixture and Cristiano Ronaldo then put Portugal ahead in Munich on Saturday, the coach would have been forgiven for wondering if this was just simply one tournament cycle too far.

Yet that dark moment amid the late evening sunshine at the Allianz Arena quickly gave way to belated vindication for Low, whose team rose to the occasion to claim a superb 4-2 victory in the game of the tournament so far.

Staring the prospect of taking no points from two games in the face, it was not Muller who turned the tide in Germany's favour but a member of that new generation they look set to rely on for years to come under Hansi Flick.

Robin Gosens won only his ninth cap for Germany against Fernando Santos' men, but his performance was that of a player vastly more experienced on this stage.

Schooled in the art of expansive attacking football through playing for a relentless Atalanta side that led Serie A with 90 goals in 2020-21, Gosens ruthlessly made the most of the inexplicable freedom given to him by Portugal right-back Nelson Semedo. 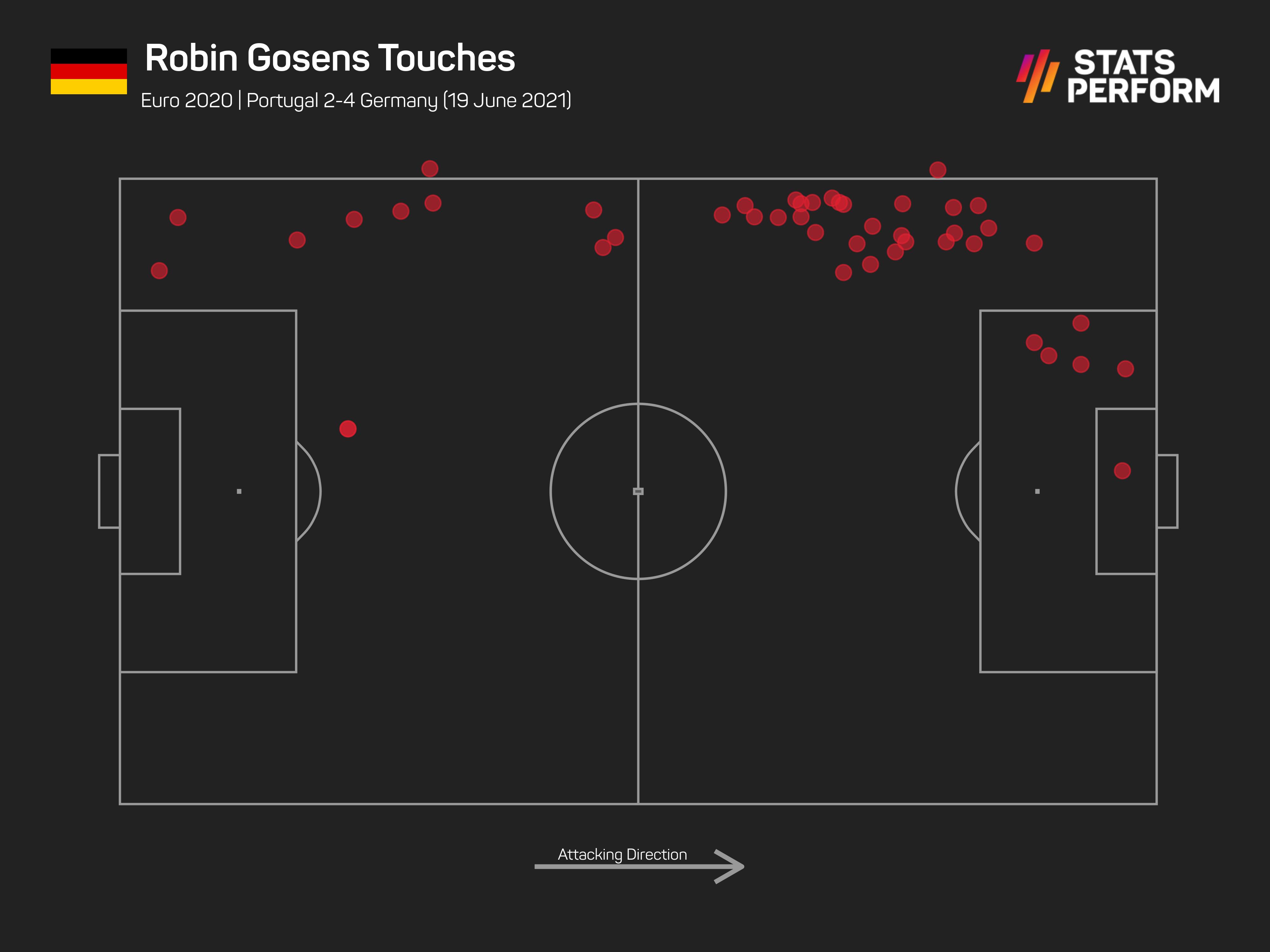 Gosens exuded confidence in the 35th minute as he hit a first-time ball across goal after Joshua Kimmich switched the play. Ruben Dias, under pressure from the unwelcome sight of Champions League final hero Kai Havertz, inadvertently levelled matters. Four minutes later, Raphael Guerreiro, who benefited from a fortunate deflection in Portugal's opening 3-0 win over Hungary, followed Dias in bundling into his own net from a Kimmich pull-back after Gosens had cut the ball back for Muller to cross.

There was no doubt Havertz had the decisive touch after Gosens put the ball on a platter for the Chelsea playmaker to make it 3-1 six minutes into the second half. A remarkable showing was then capped by Gosens with a firm close-range header from another Kimmich delivery.

Portugal pulled a goal back through Diogo Jota and Renato Sanches rattled the frame of the goal with a long-range effort, but a team that appeared poised to secure a place in the last 16 must now recover from becoming the first defending champion to concede four times in a game. It was the second time Portugal have let in four in a major tournament, having also done so against Germany in 2014.

Few would have envisioned Gosens having a hand in every goal but, with his influence and Havertz becoming Germany's youngest goalscorer at the Euros at 22 years and eight days old, this was Low's 2018 vision coming to fruition.

It may not have been exactly how he pictured it, Muller playing two key passes and Real Madrid's Toni Kroos, another old hand, heavily involved. But through that blend of youth and experience, Germany's hopes of a successful swansong for Low have life going into the final group game with a surprisingly obdurate Hungary.

On the evidence of their 1-1 draw with world champions France, Gosens and Co. may need to work harder to break down Hungary than they did Portugal.

For the 'Group of Death' to deliver, Germany needed to put the trials and tribulations that followed their no-show in Russia behind them. They did so emphatically against the unusually fragile defending champions and, heading into the final matchday, who wins Group F is anyone's guess.