A hat-trick from debutant Serge Gnabry helped Germany breeze past minnows San Marino 8-0 to cement their spot at the top of their European FIFA World Cup qualification group.

Gnabry's trio, a brace from Jonas Hector, Sami Khedira and Kevin Volland strikes and a late own goal sealed victory for the world champions in a game which often resembled a training exercise against a country ranked 199 places below them.

The win means Joachim Low's men remain top of Group C with a perfect record from their opening four games. 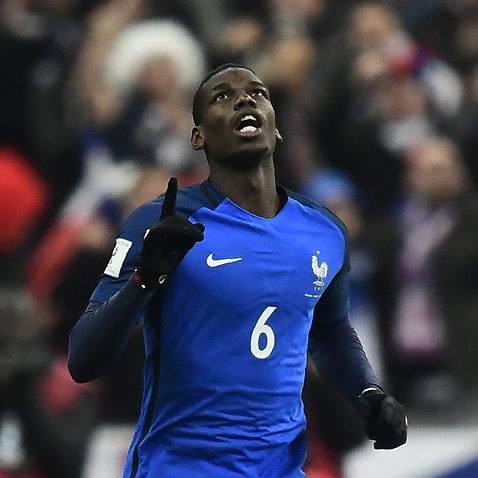 France hit back to see off Sweden

The 21-year-old Werder Bremen winger enjoyed a first appearance to remember and will cherish the hat-trick, despite the standard of Germany's opponents.

Germany inflicted San Marino's heaviest defeat when the two sides last met here in 2006, emerging 13-0 winners, but only a flurry of late goals saw them inflict a similarly emphatic victory.

San Marino did their best to frustrate their visitors by sitting incredibly deep early on, but it took just seven minutes for Germany to carve them open.

San Marino could have pulled a surprise goal back when a corner bounced off Marco Berardi inside the Germany six-yard box.

It took until the 32nd minute for Germany's third despite a string of further chances, coming after a neat interchange between Hector and Mario Gotze on the edge of the box, with the Cologne full-back eventually slotting into the bottom corner.

Two Mario Gomez strikes on the stroke of half-time were chalked off for offside as San Marino strove to keep the deficit at three.

Gomez and Ilkay Gundogan blazed over the top as the second half began in much the same fashion, with San Marino camped in their own half leaving sole striker Mattia Stefanelli isolated and unable to influence play despite his best efforts.

Gnabry swept home in the 58th minute when left unmarked in the box for his second and Germany's fourth, though he looked marginally offside when Joshua Kimmich crossed.

A toe poke through the legs of the unfortunate Simoncini at the near post gifted Hector his second of the night with 25 minutes to play to make it 5-0. England ease past Scotland at Wembley

Gnabry's hat-trick arrived as he met Thomas Muller's cross from the right on 76 minutes with a lovely cushioned volley beyond the diving Simoncini.

The unfortunate Stefanelli then diverted a cross into his own net as the hosts visibly tired for the seventh, and Volland twisted and fired home the eighth and final goal of a comfortable evening for the 2014 World Cup winners.