Now retired, the league's two-time golden boot winner Porta, 37, ironically drew down the curtain on his 17-year professional career at Atletico Cerro - the club where RIzzo, 20, is just beginning his own journey.

A Western Sydney Wanderers fan from Prairiewood in the city’s far west, Rizzo made his bow in Monday’s 3-1 loss to City Football Group-backed Montevideo City Torque in a crosstown derby.

Cerro’s Mexican coach Nathaniel Revetria didn’t blame the former NPL gloveman for any of the goals in the Villeros’ third game since the league emerged from a long coronavirus hiatus, telling Rizzo he was pleased with his performance.

His chance came after an injury to first choice Rodrigo Formento, and despite the recent signing of another backup keeper, Gabriel Araújo Soto.

“Of course there were a few nerves - but you expect that,” explained Rizzo, whose father Leonardo was born in Uruguay.

“I’ve been with the second team for a season and stepping out for the first team there’s a greater intensity and a bit more pressure. 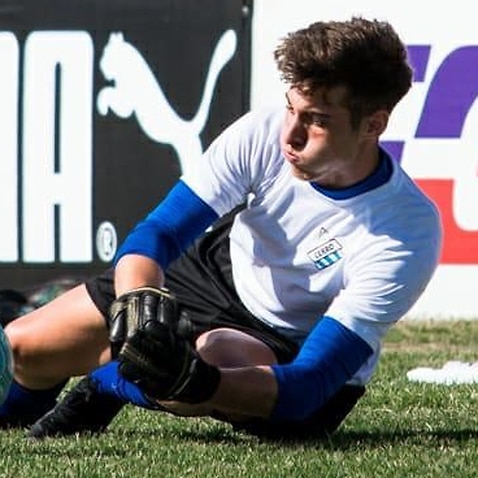 “There’s just a big difference across the board.

“I knew during training throughout the week I’d get a chance and I think I did pretty well overall.

“I couldn’t do anything about the goals - two came off deflections and the other was a defensive mistake.

“The boss was happy with me afterwards. He said I played very well and he couldn’t fault me with anything.

An avid fan of Mat Ryan and Mark Schwarzer growing up, Rizzo has yet to represent Australia at any level but is hoping this breakthrough, which came just weeks after signing a pro deal, will prove a launchpad to the international arena.

“Australia has always been blessed with great goalkeepers down the years and it would be great to get noticed and one day get my chance,” he said.

“It would be a great honour and a huge privilege to play for Australia.

“I’ve got to keep doing well and try and get more game time in a tough, hard league which is full of emotion and intensity.”

Porta - who starred for domestic giants River Plate and Nacional -  played for both Australia and Uruguay at youth level, without landing a senior cap for either.

“The Primera Division is up there among the best leagues in South America. Everybody plays for the colours here and they don’t give an inch,” added Rizzo.

“For a lot of people, being successful here is a way out of the country to a better life in a big league in Europe or wherever.

“There’s probably a little bit more hunger to succeed than you see back in Australia.”