Redlands United coach Matt Chandler dared his players to dream against A-League champions Adelaide United and now he is urging them – and every other non-A-League team in the FFA Cup – to believe they can make the final. 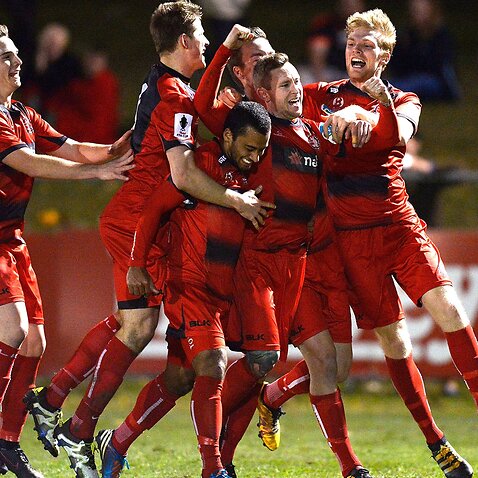 That is the next step for NPL teams, Chandler believes, after upset wins over A-League sides have suddenly become more common.

The first year of the FFA Cup, in 2014, saw one win by a non-A-League team, when South Australian NPL side Adelaide City eliminated Western Sydney Wanderers.

There were no such upsets in last year’s cup, but this week there have been two within 24 hours - with Victorian NPL side Green Gully’s win over Central Coast Mariners on Tuesday night followed by the win by Queensland NPL outfit Redlands over A-League champions.

That is the Redlands United team sixth of 12 teams on the Queensland NPL competition ladder!

Redlands appeared to be gone, deep into added time at Brisbane’s Perry Park, until a howler from sometime Socceroos goalkeeper Eugene Galekovic opened the door for a Michael Lee equaliser.

Then, stunningly, Paul O’Brien scored an extra-time, 2-1 winner for Redlands, who advanced to the last 16.

Asked what his pre-match message was to his players, Chandler told The World Game: “Go out and have the game of your lives, boys, dare to dream. That’s what I said to them and that’s what they did.

“We never stopped believing, we kept going, and they gave us a chance and we took it and then we obviously scored again and we held out and won the game.

“Anything’s possible in football, as last night proved. Results like that give you extra belief. We believed going into the game and we’ve got even more belief now.”

Could the day be coming when a non-A-League team makes the FFA Cup final for the first time – and maybe even win it?

“Why not?” Chandler said. “The National Premier League has risen the bar in football in this country. It has become an excellent competition and everyone has lifted their game and that’s why we’re seeing these results.

“The game has improved and the clubs have lifted the bar to be semi-professional and compete in a realistic sense. Why can’t an NPL team make it to the final?

“It would be great to get a couple of NPL teams in a semi, so that there was a guarantee of one in the final.

“There are two Brisbane NPL teams left in the cup at this stage and we’ve got a good, healthy rivalry with Brisbane Strikers and hopefully we can avoid them in the round of 16 because I’d like to see the chance for two Queensland teams to make it through to the last eight and maybe beyond.”

Chandler said his players enjoyed last night’s victory, but that they all had to go back to work or full-time study on Thursday.

“We had some food upstairs afterwards and a few of the boys went out and celebrated,” he said. “Some of us went back to the club and enjoyed it and we all woke up this morning and realised we did do that, we beat the A-League champions, it actually happened.

“A lot of the boys had yesterday off, which I asked them to take for obvious reasons, but I think taking two days off in a row might not have gone down too well for their employers.

Chandler said it was a phenomenal effort by his semi-professional players to endure the extra 30 minutes and beat full-time pros.

“The players all get expenses, they all get paid, yeah,” he said. “I always like to refer to us as a semi-professional club rather than a part-time club, because that’s what the boys are in their mentality, they’re as professional as they can be in their preparation and during the game.

“It’s a long time, 120 minutes for boys who only train three nights a week and have to work and I thought they acquitted themselves tremendously well in extra time.”

The wins kept coming for the sporting Chandler family on Thursday, but this time it was the coach’s daughter, 11-year-old Rebecca, excelling.

“I’ve just been down to watch Rebecca run in the 100 metres in the Redlands district school athletics championships,” Chandler said.

“She won her heat to go through to the final, so that’s a great result for her.”