A race between Australia and Greece to nail down the international allegiance of on-fire striker Apostolos Giannou is looming, as the dual nationality hitman hovers between both nations.

The 25 year old marksman was born in Greece but spent his formative years in Melbourne, and has represented both countries at youth level.

Despite being on the bench for Greece in its Euro 2016 qualifier against Hungary earlier this year, Giannou could still be available for Ange Postecoglou’s Socceroos. Davidson adamant Socceroos will bounce back 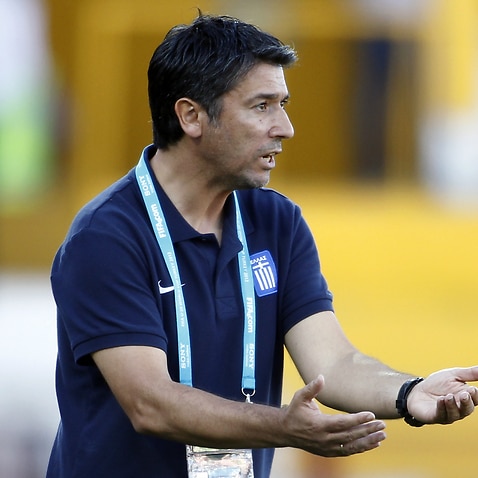 The former Victorian Institute of Sport, Oakleigh Cannons and South Melbourne rookie has started the Greek Super League season with an eye-catching five goals in six games for new club Asteras Tripoli, which is also competing in the UEFA Europa League.

And the prospect of a reunion with Postecoglou, who coached him at Under-17 level with the Joeys before Giannou returned to the land of his birth nearly eight years ago, is something he says he would savour as Football Federation Australia officials assess whether he meets the eligibility criteria enshrined within FIFA regulations.

“I gave it a lot of thought when I was much younger and to play for either national team would be a big honour. I feel both Australian and Greek," Giannou said.

“Of course I am very open to playing for Australia, but to be called into any national team you can’t just have one or two good games, you need that consistency over a period of time.

"If Australia came to talk to me it would be an honour. The Socceroos are now at a different level.

"They won the Asian Cup and things are getting better. Ange is doing a very good job.

"If a call comes from Australia, then it’s a decision I make at the time; it would be a very happy problem to have.

"Whoever comes first, if any of them come, I would be more than happy to help the team.

"I have great memories of Australia. My parents and brother are still in Melbourne and I come back at the end every season.”

Giannou has been on and off the Socceroos radar since 2009 when he and Craig Moore, his then teammate at Greek side Kavala, were part of a train-on squad made up of European-based Australians ahead of the 2010 World Cup.

Nearly two years later, while at PAOK, Socceroos scouts went to watch Giannou twice, only for then coach Huub Sevens to leave him out, a move which Giannou said was “devastating”.

After making eight appearances for the Joeys, Giannou went on to win seven caps for Greece’s Under-19s and 13 for the Under-21s, and he would already be out of Australia's reach had Greece brought him off the bench against the Hungarians in March.

Giannou was one of 53 players selected during a calamitous qualification campaign which saw the Euro 2004 champion churn through three coaches and finish bottom of a group which it believed it would breeze through.

Giannou envies the relative stability within the Australian set-up and fondly recalls his association with Postecoglou as a teenager.

"With Greece the coaches come and go and don’t get time to make a difference, but Ange has had the team two years now and has had time to put his mark on things. You don’t get that with Greece," he said.

“I remember from the Joeys, he was always strict but if you are doing what he asks you then everything is fine. He's fair that way.

"I have been watching Australia and they are playing the right way. To play for Australia would be a step up for me, something really positive and maybe it could help me get noticed also outside of Greece and continue to grow as a player.

“Australia is on the up while Greece had their peak a few years back and maybe it's the time to change a few things to get back on track.”

Giannou is with his sixth club in eight seasons in the volatile Greek landscape after stints at Apollon, Kavala, PAOK, Platanias (loan), Panionios and now Asteras Tripoli.  He has scored 34 goals across 169 games.

Giannou’s representatives at Melbourne-based FIA Sports Management, which specialises in the Asian markets, are confident the striker has what it takes to thrive on the big stage.

“He’s having a cracking start to the season. Not many Australian players in Europe can boast the record he has at the moment," manager Jon-Paul Michail said.

“We have had several clubs approach us about Apostolos, in Asia, the Middle East and Europe, but at the moment his focus is on doing well with Asteras Tripolis.

A long-time admirer of Socceroos great Mark Viduka, he too likes to come deep to take possession and bring teammates into play as well as taking on the responsibility of scoring.

"The Greek league is tough, a lot of foreign players come here and they find it difficult because they are not used to playing against massed defences," Giannou said.

"It’s been a good start to the season for me. I hope it continues."