A-League players who witness homophobic behaviour by fans during matches should be encouraged to walk off the field, gay rights advocates say.

They want to meet with members of Wanderers supporters group Red and Black Bloc (RBB) to discuss their behaviour, but said Football Federation Australia and the club need to follow up their condemnation of the incident with bans.

The RBB are standing by the banner which depicts a blue-faced man - resembling Sydney FC coach Graham Arnold - having oral sex, before a crowd of nearly 45,000 during Saturday's A-League derby at ANZ Stadium. 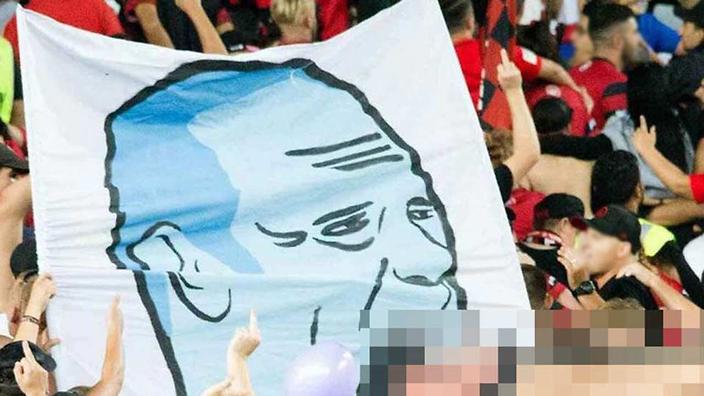 "It was very confronting. It instantly sends out a message that it's okay to mock people based on sexuality," Rangers president Joseph Roppolo told AAP.

"It shows a lack of education around the issues that affect LGBT people.

"We're reaching out. We want to turn this negative situation into a positive. The way my club and I want to approach it is work with the FFA, Wanderers and Sydney FC to promote a message that is more proactive.

"But the time for talk is over. We need actions. We hope the FFA comes down strongly on these fans and institute a 1-2 year-ban as a line in the sand."

Far from softening their position, the RBB are considering proliferating the banner's image through merchandise.

They labelled the FFA "dictatorial" after the governing body issued the Wanderers with a show-cause notice on Monday, labelling the banner "offensive to any reasonable member of the public."

Roppolo said player walk-offs must also figure in the conversation around addressing homophobia in the sport.

"Certainly, it's a conversation that needs to happen," he said.

"It's tough for the players. There's not one openly gay [A-League] player in Australia.

"The FFA needs to be doing more to provide clarity for clubs and fans about how we address and deal with these issues when they happen.

"If this was a racist banner in Australia today, we have to ask would the FFA be acting more decisively and more quickly?"

Around 80 per cent of Australians involved in sport have witnessed or experienced homophobia and Rangers are concerned about the negative impact it could have on its young people coming to terms with their sexuality.