Former Australia captain Mile Jedinak has called time on his playing career at the age of 35 to end any speculation of playing in the A-League.

The former Central Coast Mariners, Crystal Palace and Aston Villa midfielder has not played since September 2018 and made his retirement news official via social media.

He thanked his family for the role they played during his football career and told his sons to "dream big and never stop chasing your dreams".

"I was a young boy from Western Sydney with a dream to play professional football," Jedinak posted on Instagram. 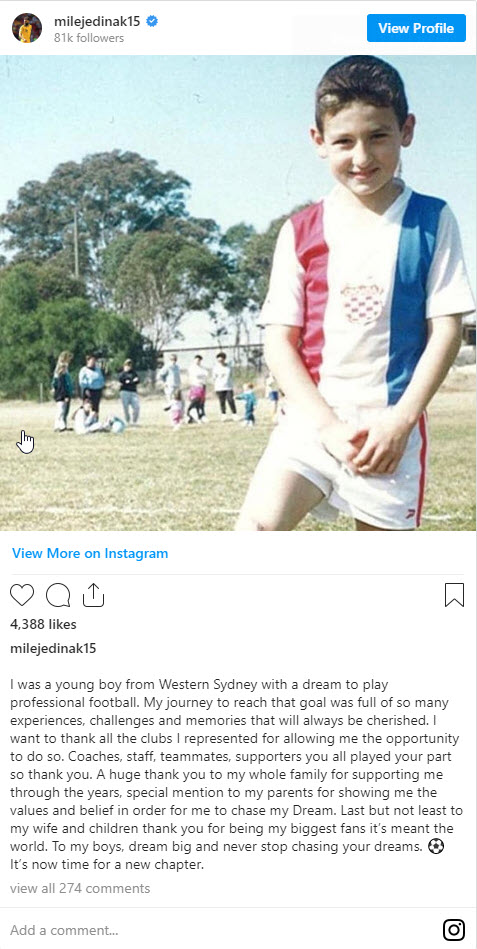 "My journey to reach that goal was full of so many experiences, challenges and memories that will always be cherished.

"I want to thank all the clubs I represented or allowing me the opportunity to do so...

"It is now time for a new chapter."

Jedinak was released from Villa's playing staff at end of the 2018/19 campaign but was linked with a return to the A-League with incoming expansion team Macarthur FC.

He had said as recently as May that he still had a "desire to play" but would accept if that was not the case.

Jedinak made his A-League debut in 2006 for the Mariners and helped them claim the Premiers' Plate in 2008. He played for Genclerbirligi and Antalyaspor in Turkey before his spell in English football commenced at Palace.

He made a huge impact at the club, making 165 appearances between 2011 and 2016 and helping the Eagles secure promotion back to the Premier League.

In a message on the club's official Twitter feed, Palace wrote: "Congratulations to Mile Jedinak on his retirement from football. A leader of men and a club legend."

Congratulations to Mile Jedinak on his retirement from football.

❤️💙 A leader of men and a club legend. #CPFC pic.twitter.com/NJiT68qZNL

He played 70 games for Villa.

Jedinak made 79 appearances for Australia, featuring at three World Cup tournaments - two of those as captain - and scored 20 goals before he ended his international career in October 2018.

A number of his former national teammates including Milos Degenek, Tomi Juric and Robbie Kruse responded to Jedinak's post to congratulate him on his career and wish him the best for what lay ahead.