Australia took their first steps along the road to the 2022 FIFA World Cup in some comfort on Wednesday morning (AEST), defeating Kuwait 3-0 on the road.

First half goals - two from Mathew Leckie and one from Aaron Mooy - gave Graham Arnold’s men the points and a solid start.

The journey to Qatar is long and just begun but here are five things to ponder.

1. Socceroos fans can be hard to please

Perhaps it was because all three goals came in the first half, rather than the second, but there were some murmurings about the performance from the visitors on social media.

That was harsher than the early September heat in Kuwait because as far as opening World Cup qualifiers on foreign soil goes, this was about as good as it gets.

The opposition was pumped up for a first major competitive game for over four years, the journey was long, the conditions and the heat provided a challenge and this was the first game in what could be 21.

The Socceroos have struggled at times in the Middle East but not this time.

The fluency can come later.

2. Irvine the main man but lots to like on the left

Prior to the game, Jackson Irvine promised that Australia would be ruthless against Kuwait and the quality of his prediction skills were matched by his composure and intelligence on the ball in sweltering conditions. 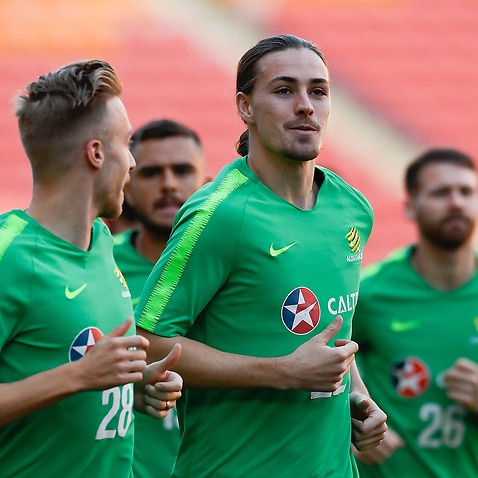 Socceroos must be relentless against Kuwait, says Irvine

Playing in the depths of the Championship with Hull City was not an issue as, for large parts, Irvine ran the game and was involved in much of the positive attacking work that Australia did.

Another plus point was that the tireless Aziz Behich and Brandon Borello combined well down the left wing and this could become a fruitful and important partnership.

3. The game should have been there for all to see

No doubt that a tie with Kuwait in the early hours of the morning was never going to keep the majority of the general public out of their beds but World Cup qualification should be available for all to watch.

Pay television may have its time and place but, for the general long-term health of the game, it should be easy to watch the Socceroos vie for a World Cup spot.

That may have contributed to a lack of excitement and coverage regarding the international break.

Kuwait may not be the sexiest of opponents but the World Cup should not be taken for granted.

If there were concerns that the lack of activity in the Premier League would produce a rusty performance from the midfielder then they were misplaced.

Aaron Mooy linked up well with James Jeggo in the middle of the pitch, providing the solid foundation that the Socceroos needed against an energetic opposition. He also got forward to cause plenty of problems with his passing, set pieces and also a goal that put the icing on three points for the team and a fine performance for the individual.

It was a welcome run-out for Mooy and it can’t have done his confidence much harm either as he returns to Brighton to fight for his place and more playing time than the five league minutes received so far this season.

Mooy’s time on the south coast will come and if his 90 minutes in the Middle East is anything to go by, he will be  ready.

5. Jordan will be the main threat

It was always likely to be the case but the race for the top spot in Group B- the only way to be sure of an automatic place in the next round - is going to be between Jordan and Australia.

The Nashama took three points off a spirited Taiwan in the opening game and then looked very good for a while against Paraguay in a friendly on Wednesday (AEST).

Jordan took a 2-0 lead against the South Americans only to end up losing 4-2.

There will be plenty for Arnold to think about when watching that game.

Both teams will be looking to take six points from their next two qualifiers before the big meeting in Amman in November.