Real Madrid are champions of Spain for the first time since 2012, here we look at five reasons why they won the title.

Zinedine Zidane's men clinched the Liga title on the final day with 2-0 over Malaga at La Rosaleda.

Madrid claimed the trophy despite taking just one point from their two Clasico encounters with Barcelona.

Here we look at five reasons why Los Blancos emerged victorious in the title race.

Zidane making the most of the squad

Zidane has succeeded this season while doing what had previously been considered unthinkable, resting Ronaldo.

The Frenchman has played Ronaldo for just 2,544 minutes this season – compared to 3,183 in 2015-16, and the result has enabled the Portugal superstar to perform when it matters most.

The establishment of Isco as a first-team regular has put the kibosh on talk of a move to pastures new and, though Alvaro Morata remains a reportedly frustrated figure at the club, the fact he has still found the net 15 times in LaLiga this season is testament to Zidane's ability to get the make the most of his squad. Zidane basks in 'happiest day' of career after winning LaLiga

While Ronaldo is the headline maker in the vast majority of Madrid games, their success this campaign could not have been achieved without the Brazilian duo of Casemiro and Marcelo.

In the 40 games Madrid have played with Casemiro in all competitions this season, they have a win rate of 75.6 per cent, without him that drops to 66.7.

Marcelo's impact has been easier to identify to the naked eye, the left-back leading Europe's top five leagues in assists from defenders and providing service that has been pivotal to Madrid's forward line and Ronaldo in particular.

While Barca have hit a rich vein of form following their thrilling 3-2 Clasico triumph at the Santiago Bernabeu last month, stumbles have been unusually frequent in Luis Enrique's final season in charge.

The Catalans have been particularly vulnerable away from home, losing to Celta Vigo, Deportivo La Coruna and Malaga and drawing at Real Betis.

Barca's home defeat to Alaves in September was certainly detrimental, as was a run of four draws in six games in mid-season, which included a 1-1 stalemate with Madrid at Camp Nou, and those slip-ups rendered what could have been a crucial triumph in the capital immaterial.

What has been most surprising about Madrid's form both domestically and in Europe is that they have been able to maintain it despite missing their other talisman, Wales international Gareth Bale, for much of the campaign.

But they have adapted to his absence brilliantly, with a switch to a 4-4-2 diamond enabling them to suffocate teams in midfield. In that system Modric and Kroos tuck in ahead of Casemiro, relying on the full-backs to provide the width. 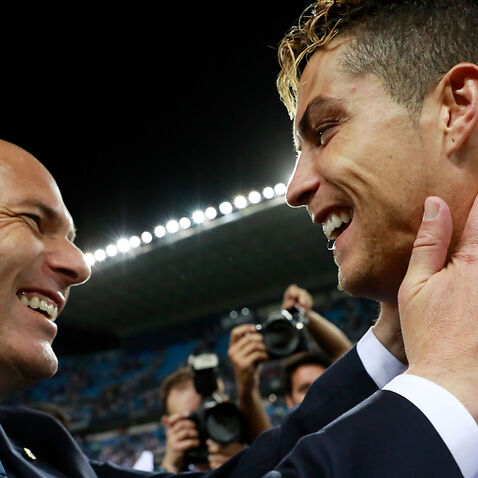 Ronaldo hits out at critics after firing Madrid to LaLiga glory

Further forward Isco has flourished as a roaming attacking midfielder with 10 goals and eight assists in the league, while Ronaldo's transition to central striker has been a seamless one.

The Portugal superstar has 25 league goals to his name – with five of those coming in a run of tricky fixtures against Valencia, Sevilla and Celta Vigo that Madrid all won to move within a point of the title.

64 consecutive games with a goal

It's a particularly vacuous cliche, but it is one that rings true. If you don't score goals, you don't win games.

Failing to score has not been a problem for Madrid and, with or without Bale, they continue to prove extremely difficult to stop.

Madrid finished the season having found the net in 64 consecutive games in all competitions.

Barca are similarly prolific, but the two games in which they failed to score in the league – both against Malaga – resulted in four dropped points that would have seen the Blaugrana retain the title.