Tune in this Thursday from 2:30pm (AEST) to relive an absolute 1998 FIFA World Cup round of 16 classic between Argentina and England that saw an incredible goal, an iconic red card and one of the all-time great set-pieces.

WATCH the next of our FIFA World Cup classic matches - Argentina vs England 1998 - this Thursday June 4 at 2:30pm (AEST) on SBS and streamed via The World Game website / app and SBS On Demand.

Here are five reasons to tune in to this amazing display of international football on the world's biggest stage.

This really was a battle of two heavyweight nations.

For Argentina, you had two of the greatest defenders in Javier Zanetti and Roberto Ayala.

In midfield, the terrorising Diego Simeone was joined by the geniuses of Juan Sebastian Veron and Ariel Ortega, and leading the line up front is the legendary Gabriel Batistuta.

For England, the impressive David Seaman is in goals, guarded by a formidable centre-back pairing of Tony Adams and Sol Campbell.

A Three Lions midfield that combined the young enthusiasm of David Beckham and Paul Scholes, with the experience of Paul Ince.

And up front, the Premier League’s all-time top scorer in Alan Shearer and an 18-year-old Michael Owen, who had one of the greatest games you’ll ever see an Under-23 player have at a World Cup.

One of the great excitements of any World Cup is when a young player really announces himself on the biggest stage.

In 1998, that player was Michael Owen. And this was that moment.

Beckham lofted a short pass to Owen, who received it just inside Argentina’s half.

The first touch is a genius outside-of-the-foot flick to take him past Jose Chamot.

Owen then shows incredible strength for a young, and very small player to hold off Chamot.

By the time the then-Liverpool striker reaches Ayala, he’s at top speed.

Owen goes past Ayala like he’s a training cone, before smashing it into the top corner to cap off one of the most memorable goals at a World Cup.

This was after he had already won the penalty for Alan Shearer to equalise and make it 1-1. Truly one of the great World Cup performances on a losing side.

But this goal was rare for two reasons. One the scorer, and two - the way it was scored.

On the edge of the area, Argentina lined up a free-kick just before half-time.

Batistuta stood waiting, appearing as if he was about to take a driving shot towards goal.

Distracted by this, the English defence didn’t notice Zanetti peeling away from the wall and into free space, inside the box.

Veron smartly found Zanetti and the defender wasted no time clinically smashing the ball into the top corner.

One of the all-time great set-pieces at a World Cup.

David Beckham’s legend was forged in this moment.

Early in the second half, Beckham went down after being fouled by Diego Simeone.

If you need any insight into how Simeone’s Atletico play, look no further than how he played the biggest matches. 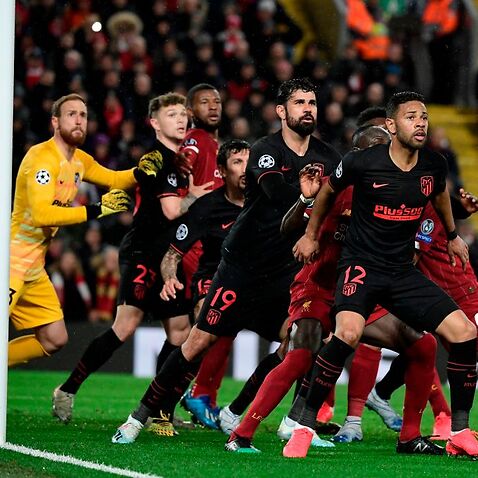 Simeone's Atleti are a modern reincarnation of catenaccio

Simeone knew exactly what he was doing when fouling the then 23-year-old Beckham.

He tussled the young Englishman’s hair, trying to provoke a reaction right in front of the referee.

As soon as the inexperienced Beckham flicked his boot at the Argentinian Simeone went down, yelling at the referee while doing so.

A deserved red card, yes - but the intense hate that Beckham subsequently received from the English press, and some fans, was insane and disgraceful.

Beckham would go on to resurrect his image in the eyes of the English public three years later against Greece in 2001.

He is now one of the most beloved ex-players worldwide but after this incident, Beckham had to leave his own country for weeks to escape immense scrutiny.

Every great World Cup game needs to have a number of 'what-ifs'.

This has so many, what if Sol Campbell’s header hadn’t been ruled out just before the end of normal time?

What if Beckham had kept his cool?

What if Graeme Le Saux hadn’t taken a caffeine tablet at half-time, which meant he had to be substituted early? Would England have won the match?

And for Argentina - should they have killed the game earlier, given they were up a man for over 40 minutes?

The match against England was tiring for the regulation 90 minutes, never mind 120 plus penalties.

Argentina would go on to face the Netherlands in the quarter-finals, where they conceded in the very last minute.

So many questions, but there is no doubt about one thing - Argentina v England is one of the all-time great World Cup matches - and surely not to be missed.

'We didn't have any problems' - Zidane bids Bale farewell