Irrepressible Kerem Bulut believes he’s close to discovering the form that will attract the interest of Australia coach Ange Postecoglou, as he begins to flourish in the Greek Super League for fast-improving Iraklis. 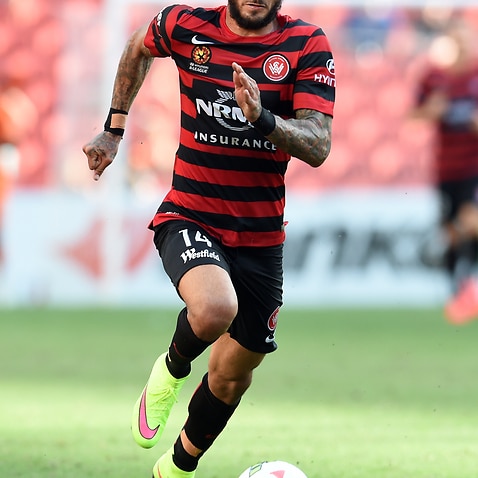 The firebrand former Western Sydney Wanderers forward showed all shades of his passionate nature at the weekend, scoring his first goal for his new club, getting booked for a shirt-off celebration and then seeing red – all in the space of three crazy minutes.

But Bulut, who also celebrated his first goal in Wanderers colours by ripping off his jersey, was in buoyant mood as he looked back at his bitter-sweet 68 minutes as Iraklis made it three wins on the bounce by overcoming Asteras Tripolos, for whom fellow Australian Apostolos Giannnou got on the scoresheet for his ninth league goal of the season.

Dual nationality Giannou made his senior debut for Greece in the recent international against Turkey, and while uncertainty continues over whether he will ever get a Socceroos call, there’s no ambiguity in the mind of Bulut as he seeks to build a solid resume which come March, when Australia face their next World Cup qualifiers, will make it difficult for him to be overlooked.

“I am feeling unstoppable now.  Hopefully I can get rewarded with a call up for Australia at some stage soon,” Bulut said.

“I am pushing as hard as I can, and I think I deserve a chance. I proved myself in Australia with the Wanderers and I am proving myself in Europe, and I think it would be great to get rewarded for the hard work.

“Hopefully they’re watching back home, and Ange will take note. If I keep going then maybe a call-up is just around the corner.

“I feel I’m gaining that respect now, and I'm feeling empowered. It’s hard when you come here from Australia, but things are going well now.

“I didn’t come here for nothing; I came for big things to happen. The main thing is I’m fit and well because I believe in my ability, and I feel I am growing as a person and as a player.

"I ger the impression I've been falling off the radar a bit back home, and I don’t want that to happen."

Iraklis president Spyros Papathanasakis singled Bulut out for special praise, as did coach Nikos Papadopoulos, after an all-action display prior to a red card, which the club considers was soft at best.

“It was good to hear him say some nice things about me on TV ... gave me some pretty big raps and I’m happy with that," Bulut said.

Bulut, 23, isn’t planning on ditching his trademark celebration any time soon, he said: “Everywhere I play, I always get the shirt off after scoring my first goal. It’s a bit of a tradition for me.

“I hardly touched their player. I didn’t even see him. It might have been a foul, but never a yellow. I miss a game but it’s not the end of the world.

"I feel I have now cemented a first team spot (after early season injuries) and the boss says I bring energy to the team. I am playing on the right wing, and to score from that position is a massive thing for me.

"I wasn’t this fit at the Wanderers where the coach was playing me for 60 or 70 minutes and then having to replace me.”

Bulut has been following the ructions back in the A-League and is fully behind the recent match boycotts by active fans groups, with the Wanderers' Red and Black Bloc at the forefront.

“Good on the fans, let them keep going until their voices are heard. I think things are going to change in their favour," Bulut said.

“Everybody now sees how serious they are and I think they did the right thing to take action over the issues that are concerning them, and it’s good to see all the supporters united as one in the cause."