Antonio Di Natale admits he 'cried like a baby' after playing his final game for Udinese.

Di Natale, who made almost 450 appearances for Udinese since joining in 2004, announced in April he will leave the club at the end of the season.

The 38-year-old came on in the 78th minute with Udinese 2-0 down against Carpi in the final day of the Serie A season but the home side won a penalty just 60 seconds after his introduction.

Di Natale converted the spot-kick to mark just his second goal of an injury-hit campaign but Udinese eventually went down 2-1 at the Stadio Friuli. 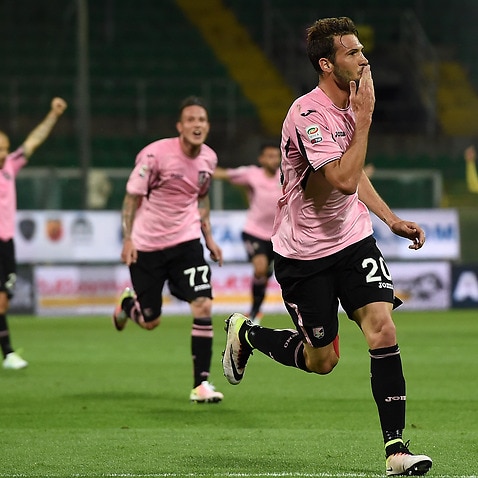 Palermo win to stay up and condemn Carpi to the drop

The veteran striker said he was relaxed about his final game, up until he reached the dressing rooms of the stadium.

"I think in the end 12 years was a great journey together," Di Natale told Sky Sport Italia. "I want to thank my team-mates and the club, everyone who was with me during this time.

"I hurt myself in training, but I wanted to play those 20 minutes and the doctors allowed me to do it.

"Until yesterday I was relaxed, but when I sat in the locker room tonight I was crying like a baby. I saw 12 years flash before my eyes.

"I scored 227 goals. I did many things for this club, scored many goals, so I hope to remain in the history of this club.

He added: "The president [Franco Soldati] is a great man, he puts everything at our disposal and this beautiful stadium is down to him. He was like a father to me and helped me throughout this career."

As for what is next, Di Natale admits he has yet to call time on his playing career.

"Right now I want to go home, spend some time with my family and then I'll decide what to do next," he said. "I know any day I can call the president and we'll talk.

"It was pleasing to receive so many messages, but most of all I want to thank [former Udinese boss] Francesco Guidolin. We reached the Champions League together and are very close."