The news today that nine A-League club chiefs have issued an ultimatum to players to either accept a 30 per cent pay cut or risk being stood down is the icing on top of what has been a disastrous year for the professional game in Australia.

Since March, the Australian football fraternity has been dragged through the proverbial pits of hell, perched atop a chariot commandeered by rogue club owners, a disillusioned broadcaster and a clueless Football Federation Australia.

It’s been a ride that no one has wanted to be on but everyone has been forced to take, and this latest development takes a turn for the worse.

Ever since the COVID-19 enforced shutdown, the game’s most important contingent - the players - have been held to ransom and forced to prop up a competition that has been badly neglected and abused by those paid to protect the very house they built.

Now, as the walls come crumbling down and the hapless conversations between Professional Footballers Australia and stubborn club owners over a Collective Bargaining Agreement reach an impasse, it begs the question: where the bloody hell are you James Johnson? A-League ultimatum: Players told to accept pay cuts or be stood down

“FFA have initiated a change to FFA’s role in the League Collective Bargaining Agreement negotiations by pivoting a more traditional “regulator” role in the future so that the Australian Professional Football Clubs Association (APFCA) can assume the role of “employer representative” and key negotiator on behalf of clubs for A-League and W-League with the PFA.”

“This is a step process towards unbundling.”

The silence from FFA on this matter has been deafening and although a source revealed that the governing body “are monitoring the situation closely”, others connected to the negotiations said “right now it’s very intense between the clubs and players. This will get ugly if it’s not already.”

So what type of leadership game are the FFA running?

The kind that is happy to sit back and allow for its relevant stakeholders to face off in a nasty battle until the bitter end, and then swoop in at the eleventh hour to try and salvage what’s left from the wreckage?

This is precisely the reactive type of leadership fans have been rallying against for years under the guise of Steven Lowy, David Gallop and the previous board, yet somehow the game finds itself in a similar situation only with different names on the Oxford Street doors. 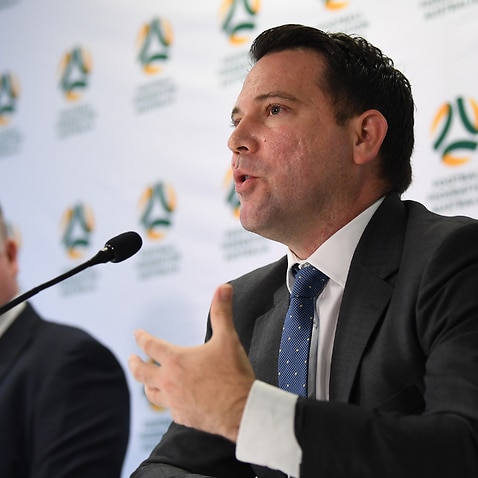 Make no mistake though, the club owners are not to escape without blame or shame.

Ever since the A-League chiefs began publicly agitating for an independent model over three years ago, they have been unrelenting in their pursuit of total control.

From sharing articles with headlines like “Time for FFA to show real leadership and bring miserable chapter to an end” on their official website to slamming the federation repeatedly, saying: “the FFA have shown its disregard for the A-League and those who have invested in it.”

In 2018, the owners got what they wanted and with Steven Lowy gone and the in-principle ownership deal struck, APFCA Vice-Chairman Chris Fong said “our immediate priority is the transition to a new, independent A-League as we work to bring the game in line with best practices in Australian sport and in the world’s most successful football leagues.”

By now, the air is so thick with irony after these statements that it makes the hazard reduction smog pale in comparison and all of this might be comical if it wasn’t affecting the game we all love so much - but it is.

When I contacted vice-president of Melbourne City and APFCA representative Simon Pearce for comment, he did not respond. Neither did APFCA vice-president Fong.

They had both read my messages.

But perhaps the most sensational fact in all of this is that FFA are still legally responsible for the existing A-League licenses and this laissez faire approach from CEO Johnson and the board is the personification of poor leadership and mind-boggling on many levels. Further still, FFA will also hold a 20 per cent share in the new leagues body, as well as a "Good of the Australian Game" share, so, based on this, the only time the governing body are interested in getting involved in financial disputes is when it benefits them.

When it came time to re-negotiate the Fox Sports broadcast deal for the the resumption of the 2019-20 season, FFA led the discussions and were front and centre but now when it comes to the livelihood of the players, they are nowhere to be found.

For all of Johnson’s musings that this was the game’s “opportunity to reset” and that “the way the game has responded has been one of unity” - he has failed to stand up at a time when the game needs him most.

In April, Johnson told the Courier Mail: “We’ve been clear that if the clubs and the PFA cannot resolve player matters with stand downs, then we would intervene.”

In moments like these, I can’t help but think back to Steven Lowy’s words from his parting press conference over two years ago which have continued to haunt me.

“Be careful what you wish for,” he said with respect to the A-League achieving independence.

What we wished for was better governance, better operators and less political remonstrations from those in positions of power, but what we got is confusion over who is steering the ship, club owners protecting their own interests and a governing body incapable of showing leadership when crisis strikes.

You’ll have to forgive me for having a strong sense of deja vu here.

If FFA don’t step in soon to try and resolve this, they risk becoming the greatest villain in this horror story that none of us have enjoyed watching - least of all the players.

So while Johnson sits inside his office, with sprawling views of the Sydney harbourside, and contemplates what move he should make next, perhaps he could spare a thought for the A-League footballers and their families who stand to lose their livelihood next week.